Trump's Choice To Lead EPA Has A History With The Agency 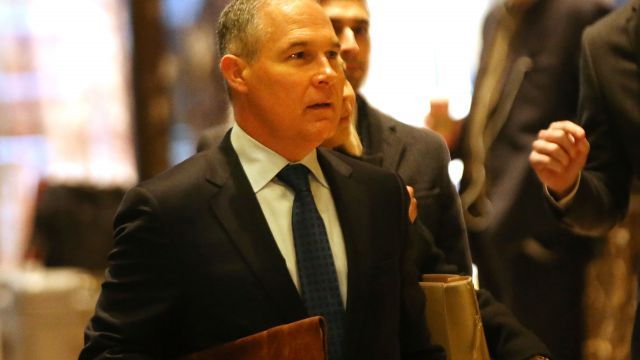 SMS
Trump's Choice To Lead EPA Has A History With The Agency
By Jake Jones
By Jake Jones
December 7, 2016
He's called EPA regulations "coercion" and has fought to slow down the move away from fossil fuels.
SHOW TRANSCRIPT

Pruitt has a long history with the EPA, but it's not a friendly one.

Pruitt has argued against environmental regulations and played a role in the 28-state lawsuit against President Obama following his new effort to cut carbon emissions.

Addressing climate change is one of the EPA's top priorities. But conservatives like Pruitt have accused the agency of federal overreach.

SEE MORE: OPEC Made A Deal To Cut Back Oil Production In 2017

"We believe that is a form of coercion by the EPA, forcing the states to take action — to do what? Accomplish the shifting of electricity generation to other sources," Pruitt said during a Federalist Society panel discussion.

Trump's pick has been denounced by progressives as a step backward in the fight against climate change.