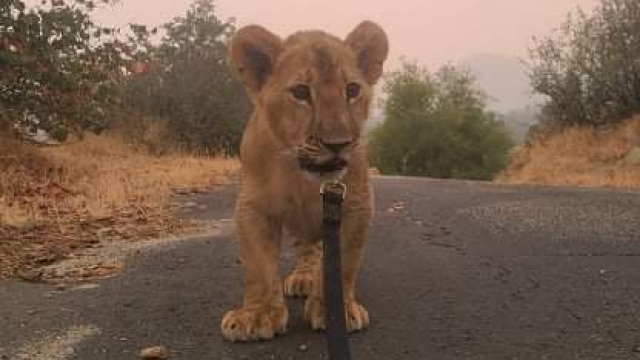 SMS
Why One Big Cat Sanctuary Is Staying Put In The Wildfire Zone
By Jason Bellini
By Jason Bellini
October 20, 2021
Wildfires have forced this big cat sanctuary owner to roll with the punches, including moving the massive animals.
SHOW TRANSCRIPT

A nonprofit sanctuary nestled in the foothills of California's Sierra Nevada mountains keeps finding itself near the path of wildfires. But it's not moving.

DALE ANDERSON: "At the beginning of the year, fire season, we go through all our checks. We get crates out. We do prep on making sure that cats are ready to go if we have to."

JASON BELLINI: "Where do they go if there's an emergency?"

ANDERSON: "If we have to evacuate — which we did a complete evacuation in 2015 with the Rough fire — we had cats in four or five different facilities ... Because again, if it's just a one-day or two-day evac or something, you could probably keep them in the crate for a short period of time. But we were out for two weeks."

BELLINI: "Which you have to do before you can transport them?"

ANDERSON: "We have to do it to be able to get them in crates. We're feeding the cats in the crate because that trains them to go into the crate. So if we have a fire, we can get the cat in the crate a lot easier if they’re hungry and want their food they go into the crate and close the door and then it's not as stressful for the cat."

BELLINI: "What about the smoke? Is that a factor for you guys?"

ANDERSON: "Maybe long term we're going to have some smoke-related issues that might come up. We watch for that kind of thing. Most of them go inside in their dens and just rest. They're not out running around doing things."

Fires aside, these are wild times in the big cat world because of the spotlight Netflix's "Tiger King" put on the controversial practices of some big cat parks. Anderson said he's known Joe Exotic for a while, and one of his cats even came from the Netflix star.

"If you don't like seeing a cat in an enclosure, that's OK," Anderson said. "Don't come here. But what I'm doing here isn't bad for the cats."

He says what's good for big cats in the wild is the money that sanctuaries like his raise to help protect them.

"Cats are independent animals," Anderson said. "They think about their own situation. Their own interest doesn't mean they can't be friendly and kind, just like a dog would, but they also have that independent spirit to them. So cats, when you sit there and say, why do I want to work with cats? I sit there and go, because I like that independence. I like to be independent. I like to have my own thinking, my own way of doing things, and cats do the same thing."

Anderson's way is staying in the fire zone, trying to avoid the cat fights.