What Are NFTs, And Are They Worth It? Experts, Artists Weigh In 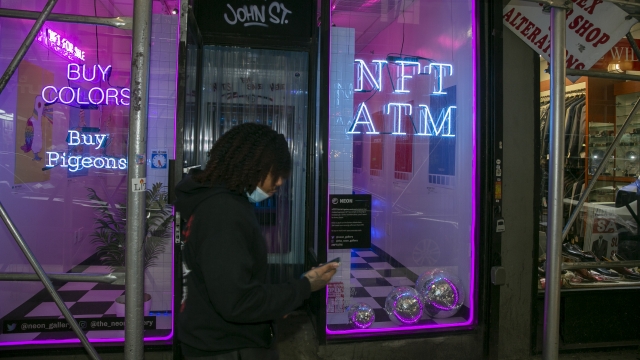 SMS
What Are NFTs, And Are They Worth It? Experts, Artists Weigh In
By Axel Turcios
By Axel Turcios
March 3, 2022
Non-fungible tokens are digital assets built using generally the same programming as cryptocurrency. So, why are they exploding in popularity now?
SHOW TRANSCRIPT

How much would you pay for a digital image or an online illustration?

People are paying a lot of money for them.

Historically people have bought objects they can physically keep show off and use as investments, but now revolutionizing the finance world is the multi-million-dollar world of NFTs.

Lissette Nolasco from the music and sports NFT platform called "OneOf" says the authenticity of an NFT can be verified on the blockchain, an online network or server considered inviolable.

"An NFT is a digital asset, which can look like a video and illustration, a poem, a song that's unique in its nature and exist on the blockchain," Nolasco said.

Look at them as digital files that cannot be copied.

"You can't screen shoot or screen record an NFT because when you capture that, it's not existing on a blockchain, it doesn't have that DNA," Nolasco said.

Previously collected by cryptocurrency holders, now anyone can buy an NFT with regular dollars.

ONEOF'S ERIK MENDELSON: Because they're digital natives. They grew up around the technology. My son is 11 years old, and he plays Fortnite, and he spends a lot of daddy's money with Fortnite skins. And I said, 'Tristan, do these skins give you any utility in the game?' He’s like, 'No daddy, I just want to look cool.'"

Although anyone can buy an NFT, they’re certainly a symbol of status.

For art historian Alena Mendez, social media has changed the market of art.

"The art critics, galleries, the museums that traditionally set value to art are now being replaced by the likes and the comments," Mendez said.

But there’s no doubt NFTs can be profitable business.

"There's a whole new culture of NFTs in flipping, so buying and reselling," Nolasco said.

Every time an NFT is sold or resold, the creator obtains at least 10% royalties.

"I would say financially, I help my parents out more than before," Martinez said.

The Mexican-American man went from selling flowers and oranges on the streets of Los Angeles to making thousands of dollars by selling his digital art pieces.

"It's a surreal feeling to be able to achieve dreams," he said.

There are people who criticize those who buy NFTs. Unlike a painting you can hang on the wall, NFTs are intangible. But the truth is, every day the number of NFT owners grows bigger because they either want to be part of what’s trending or just for the love of art.

But experts in the industry say it might get tricky for those who obtain an NFT as an investment.

"Anyone who buys any asset, whether that be real estate, physical real estate or digital NFTs should know that that asset could go up, and they hope it's going to go up again, and obviously also go down in value," Mendelson said.

The mayor of Miami, Francis Suarez, is inviting NFT enthusiasts to the magic city by creating Miami’s own crypto coin and tech-friendly events.

"We want to be the cryptocurrency capital of the world," Suarez said. "We think that the democratizing technology we’re seeing provides wealth for people across the spectrum. "

Whether or not NFTs will prevail, the power of the cloud will continue to evolve.