Voters In 4 States Heading To The Polls Tuesday 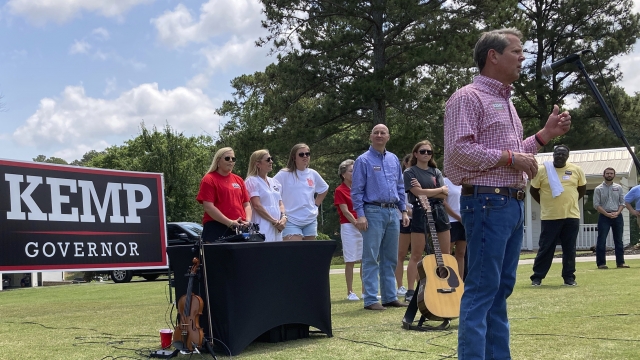 Voters in four more states will be heading to the polls Tuesday.

Georgia, Alabama and Arkansas have primaries. And Texas has runoffs.

Georgia is of course one of the states being most closely watched this election cycle.

There's a lot of attention on the governor's race in Georgia, more so on the Republican side between the two prominent candidates incumbent Brian Kemp and former Senator David Perdue.

Gov. Kemp during his remarks at an event on Saturday signaled the attention the race is getting in the national media. When you zero in on both campaigns you really hear two different themes emerge.

"We are in a fight for the soul of our state, and what happens in Georgia is going to determine what happens in the United States of America I think in a lot of ways ...that's why Marty and the girls and I are getting up every single day. And if you will nominate us on Tuesday we will continue to do that through Nov. 8 to make sure that Stacey Abrams is not your governor or your next president," said Kemp.

Kemp is already projecting a sense of general election competition there and focusing much of his time on Abrams, his likely Democratic opponent.

But on the Perdue side, former governor of Alaska Sarah Palin took a break from her campaign for Alaska's sole congressional seat to support him.

"Kemp had opportunity to do something about the shenanigans that had gone on in this last election — I don't know why he was so hesitant, why you know he kind of just went along to go along, and that's unfortunate, and we can count on David Perdue to do the opposite of that. But to challenge the status quo," said Palin.

Both campaigns are looking to draw in supporters with last-minute rallies.

Kemp will be on stage at an event with former Vice President Pence, in what is a major break from Trump; meanwhile Trump will hold a telephone rally with Perdue on the eve of the election.

For the Democrats in the race, like Abrams, who's running for governor again and incumbent Sen. Raphael Warnock, it's been a calmer campaign with not as many events leading up to the primary. But that will likely change after Tuesday.

It's already been a historical race simply by the early voter turnout which has shattered previous numbers. Over 850,000 voters total participated in early voting in Georgia; for the lead up to the 2018 primary it was just about 300,000 total votes.