Abuse Victim Speaks To Newsy About Attack By Russian Troops 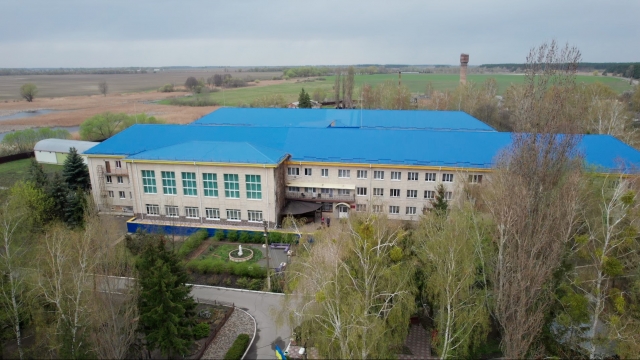 SMS
Abuse Victim Speaks To Newsy About Attack By Russian Troops
By Jason Bellini
By Jason Bellini
April 27, 2022
The director of a special needs home, Maryna Hanitska, says Chechens took over, holding everyone prisoner to use as human shields.

Down Borodyanka's Centralna Street — past the bombed out apartments —  is a building the townspeople thought would be a refuge.

Hundreds took shelter hiding behind the walls of Ukraine's largest facility for people with mental illness and disabilities.

The town residents and the 500 patients prayed the Russian bombs would spare them a direct hit.

"It was horrible, " Director Maryna Hanitska said. "Every single time there were strikes, it terrorized them."

She watched as tanks rolled down Centralna Street toward them.

And then, the Chechens arrived.

Weapons drawn, they took over the facility, holding everyone there prisoner to use as human shields.

Hanitska began a fight for survival, begging for mercy for herself and her patients.

But makeshift graves are testimony that not all would survive.

Thirteen people died, not from shells and bullets but from being forced to live without power, heat, or water, dying of sickness and the terror of Russian occupation.

"On the day they [the Russians] arrived, I said, 'If you want to take prisoners, take me, but don't touch the sick people,'" Hanitska said. "They took me out, pulling me by my hair. They were looking for Ukranian soldiers or weapons. They said if they found a single rifle or local defender they would cut me up, put pieces of my body into boxes, and send it to the 'fascist Ukrainian president."

A Chechen colonel demanded she record a propaganda video with him, saying if she behaved she would live.

"He said his part of the video and then he turned to me," Hanitska said.

She says the colonel commanded her to "smile and thank Vladimir Putin for our liberation."

"But all I could say was, 'Thank you for not killing us,'" Hanitska continued. "I thought that was the end and now they would kill us."

NEWSY'S JASON BELLINI: How did they respond to that?

HANITSKA: Probably he didn't like that. To be honest, I don't remember.

She didn't remember because minutes later, she fainted.

Over the next two weeks, the Russians forced them to fend for themselves.

"It was horrible," Hanitska said. "We used water from the pond because the Russians would not let us leave."

The facility cares for patients with schizophrenia and children with autism, Hanitska told Newsy.

"It's hard enough to work with them in regular times, but can you imagine how it was during war?" she asked.

Normally, 250 people work at the facility. Many of them fled at the start of the Russian invasion, leaving Hanitska with just eight employees to help hold things together.

Hanitska got on her knees to beg the Russians to let the patients leave. The soldiers agreed.

Then Russians moved in, until they withdrew from Borodyanka, leaving the facility empty.

Hanitska's fears are now for her brother, who calls from the front lines where he is fighting.

And Hanitska cut off all her long hair that the Russians dragged her by, as if she could also get rid of the painful memories.