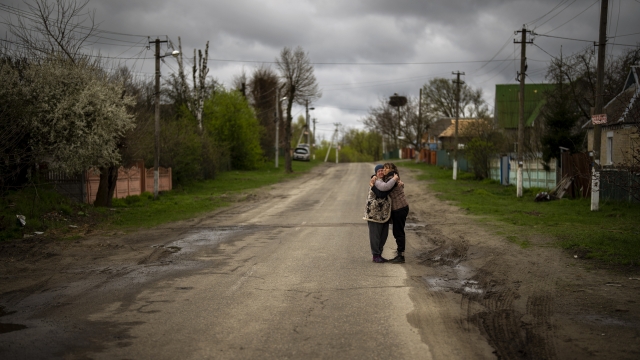 SMS
Ukrainians Take DNA Tests To Help Identify Dead Bodies Of Loved Ones
By Jason Bellini
By Jason Bellini
May 4, 2022
Bodies have been found in the streets, in cars, in buildings and in eight mass graves so far discovered.

They line up in Bucha with hope in their hearts – too many about to be broken.

This is the first day DNA testing is being used to help identify the dead, and Yulia Baesh, whose husband is missing, is steeling herself.

"To be honest, we expect that we may find him here," she said. "We hope that he is somewhere in captivity."

This Kyiv suburb is infamous for the slaughter of civilians. Amid all the cruelties uncovered here, a different type of torture continues — that of not knowing.

At the start of the war, Yulia's husband, Vitaly Yefimchuk, sent her and their two children to safety in western Ukraine. He stayed in Bucha with a relative to protect their home.

"Every day we spoke by phone, until March 7," Baesh said.

That day, she says: "They cooked breakfast on an open fire, because they didn't have any gas. After that, he drove to store for water or bread. And from that time, he disappeared."

What's required of her today, she can't do alone. She needs her 9-year-old son, Dmytro, as he alone is the genetic connection to his father.

"We've come here to do DNA analysis," he said. "We want, as soon as possible, to find our daddy."

NEWSY'S JASON BELLINI: You hope that test will be negative?

A French team brought in a mobile laboratory. That's where they're collecting the DNA evidence to help the Ukrainians identify the bodies that are in the morgue and in the refrigerated truck behind the tent.

Baesh shows her documents and gets the number for her son's turn to provide a DNA sample.

They'll check to see if Dmytro's DNA matches samples taken from the unidentifiable bodies found in the nearly four weeks since the retreat of Russia's military.

Bodies have been found in the streets, in cars, in buildings and in eight mass graves so far discovered.

"And in those eight graves, we have found 148 bodies," Deputy Head of Kyiv Regional Police of Ukraine Maksym Ocheretianyi said. "So the total number has been 1,202. And we have not identified almost 280 people."

Evhen Spirin, a volunteer at the morgue here, has seen the condition of those 280 unidentified bodies.

"You can't recognize them," he said. "We try to find special signs like tattoos or scars."

EVHEN SPIRIN: Yes. A lot of people had bound hands and gunshot wounds in the eye or back of head.

Under Ukrainian law, the taking of DNA samples requires a prosecutor's permission. That's why Andriy Turbar is here.

"We have had several cases in Borodyanka when men were captured and moved to Belarus. And I don't deny this possibility for some people," Turbar said. "I also understand that people try to keep hope that their relatives are really alive. But the truth is that Russian soldiers committed a lot of war crimes."

After more than an hour waiting, it took around 15 minutes for Dmytro to complete the process of providing DNA samples.

Afterward, he and his mother were ushered away to complete the process, going past the refrigerated truck before confirming the details on how she'll be informed of the results: By phone, possibly in the next few days.

She said she saw signs that the Russians had entered her home, but she's found nothing stolen. Just some broken windows and broken hearts.

"We just had our wedding last summer," Baesh said. "We lived together for 11 years, but just last year we wanted to get married."

BELLINI: How are you doing?

IHOR: It's hard. But I know for whom I need to live and this understanding gives me the energy to keep calm.

It's calmness his mother admits she doesn't have.

"I'm losing my hair and have a hand tremor," Baesh said.

The cruelty of a senseless war is on their faces, and in their trembling hands as they endure the pain of uncertainty and wait for that call.