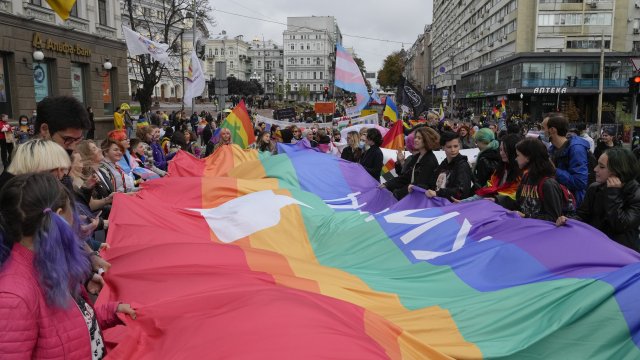 A narrow hallway, a stairway and a sanctuary. This is Denys Kratt’s home away from home.

This is more than a refuge. It’s a safe house for people like Kratt and his boyfriend and a number of their friends who can’t go because of the restrictions on men leaving Ukraine — and who can’t fathom the idea of living under Russian occupation.

In happier times — really, just a few weeks ago — this was a place of celebration. A restaurant, microbrewery and stage for shows and celebrations of life events. Kratt managed marketing for the company’s Kharkiv location. Those marketing skills are going to good use here: He's pitching this place on social media to friends, friends of friends and total strangers in need of shelter or donated clothes, food and medicine.

When Newsy visited Kratt last Saturday, he and Polish volunteers were frantically organizing vans to help people get out of here to Poland.

Vadyn Savescu is from Dnipro, a city in eastern Ukraine that's been hard hit by Russian airstrikes, like the one last week that hit near a kindergarten. Savescu says he was forced to consider the possibility he'd be living under Russian occupation.

VADYN SAVESCU: Since I'm a member of the LGBTQ community, I know that we are kind of first to be dealt with by the Russians because we are like enemies of [president Vladimir Putin's] system, of his ideology.

NEWSY'S JASON BELLINI: You think they would go after gay people?

SAVESCU: Yes. Yes. If there is no proper police force and no rule of law, just Russian occupation troops, some people would just go after us.

Gay rights groups have established a number of small safe houses in Lviv.

"We try to provide them with place where they can get food, clothes, sleep," said Tymor Levhuk, executive director of Fulcrum UA.

This shelter, which is in an old dive bar, is getting ready to open up for 18 people, exclusively men and transgender people. The reason being that women, lesbians, are being encouraged by LGBTQ leaders here to leave the country.

Marina Hertz and her girlfriend — allowed to leave because they are women — are getting help from Denys Kratt to get to Poland.

Savescu hoped, on Saturday, he would be allowed to get there as well because he has a documented, chronic medical condition. We found out later he successfully made it out of the country.

for Kratt, that’s not an option. Right now he considers Lviv to be safe. But he fears, if Russians were to gain full control over Ukraine, what would become of his country, his community, and himself.

KRATT: It's a very dangerous mix for me, being [an] activist for LGBTQ and activist for Ukraine. It's so dangerous for me being under the Russian occupation.

BELLINI:  Do the Russians know who you are?

BELLINI: They know who you are?

He knows they know Zhanna Simeiz. His drag character made headlines at Kyiv’s 2017 gay pride when he — she — said that once Ukraine liberates Crimea from Russian occupation, pride would be celebrated there. Or, as Russian state media put it, "Kiev transvestites scare Crimea” ... ”threaten Crimea.”

Kratt says that before Russia came in, gay people were out there.

KRATT: People from all over the world, from all [Ukraine], from Russia, [from] international countries, come to relax.

Kratt maintains a sense of humor about his situation. Entertaining, if Ukraine wins the war, ideas of the party they’ll throw.