U.S. Warns Russia May Use Chemical Or Biological Weapons In Ukraine 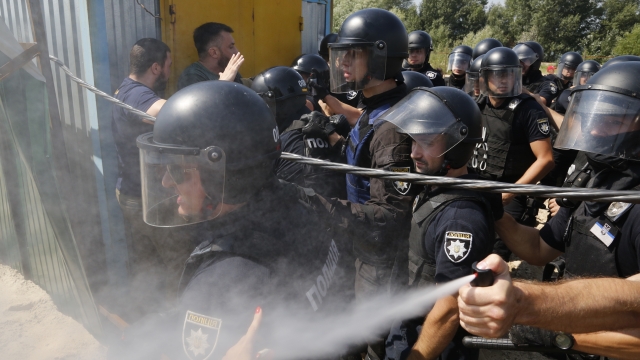 SMS
U.S. Warns Russia May Use Chemical Or Biological Weapons In Ukraine
By Sasha Ingber
By Sasha Ingber
March 10, 2022
Some say more protests and clandestine operations will come as the conflict progresses, and the use of different weaponry could come into play.
SHOW TRANSCRIPT

The U.S. is warning that Russia could use a biological or chemical weapon on Ukrainians as the war continues.

"They not only have the capacity, they have a history of using chemical and biological weapons and in this moment, we should have our eyes open," White House press secretary Jen Psaki said.

The message from the White House came Wednesday as Russian officials falsely say that Ukraine is plotting to unleash bioweapons with U.S. support.

“We are confirming the facts that were unveiled during the special military operation in Ukraine that indicate an emergency cleanup of biological programs by the Kyiv regime," said Maria Zakharova, Russian Ministry of Foreign Affairs spokeswoman.  "They were carried out by Kyiv and financed by the United States of America.”

The Defense Department partners with Ukraine’s Ministry of Health to prevent biological weapons development and infectious disease outbreaks as part of a post-Soviet threat reduction program.

"The Russian accusations are absurd, they are laughable and, you know, in the words of my Irish Catholic grandfather, a bunch of malarkey," Pentagon press secretary John Kirby said.

Still, some are concerned about the weapon threat.

"I think there is a risk that we will see industrial sites targeted," said Brett Edwards, chemical and biological warfare expert at the University of Bath.

Edwards says he’s most worried that Russia’s military will turn to riot control agents or incapacitants, which can be lethal.

"As this conflict progresses, you're going to see more protests, you're going to see more clandestine and guerrilla operations from opposition forces against the Russians," Edwards said. "I am concerned that we may see the use of widespread of tear gas and potentially even the more isolated use of incapacitants. And sadly, the history of Russian use of those is pretty brutal."

Another expert tells Newsy an attack would likely involve industrial chemicals, like ammonia or chlorine. And before the invasion began, Ukrainian intelligence said gas masks were being handed out to the Russian military and local militants in the separatist territory of Donetsk.

"Ukraine has biological research facilities, which, in fact, we are now quite concerned Russian troops, Russian forces may be seeking to gain control of, so we are working with the Ukrainians on how they can prevent any of those research materials from falling into the hands of Russian forces should they approach," said Victoria Nuland, Under Secretary of State for political affairs at the State Department.

Still, experts say conventional weapons will cause much more death and suffering for Ukrainians.