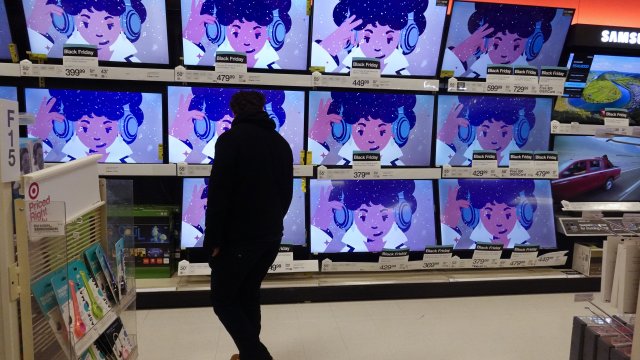 Malls and stores report decent-sized crowds, if not the floods of people that used to fight over the latest toys and electronics — online shopping is much too common for that now, and discounts are both more subdued and spread out over the weeks leading up to Christmas, on both websites and in stores.

"It actually feels really wonderful to see everybody out and about because last year I came out for a little bit and it was really quiet. It didn't quite feel right for the kickoff of Christmas," said Tami Thorsell, who was wearing a Santa hat that said 'Shop 'Til Ya Drop' while shopping at the Capital Mall in Olympia, Washington.

But out-of-stock items due to supply crunches, higher prices for gas and food, and labor shortages that make it more difficult to respond to customers are also causing frustrations for shoppers.

So far, Black Friday sales — including online — were up 12.1% by morning, according to Mastercard SpendingPulse, which tracks spending across all types of payments including cash and credit cards.

About 75 shoppers, some huddled under blankets, lined up outside the Costa Mesa, California, Target store before its Black Friday opening. When the doors swung open, the first person in line, Christian MacDonald, 17, strode inside seeking the newly released Nintendo Switch OLED video game console. But minutes later, he emerged from the store empty handed.

"I came here because I figured since it was Black Friday, they'd have the new Switch OLED in stock, but they didn't," said MacDonald, who waited an hour and a half to get in. "So I'm just going to go home, I guess."

The lines were significantly shorter than in pre-pandemic years, according to shoppers.

"It's a lot less crowded this year," said Adlei Silva, 18. "I mean, people could be just shopping online more and more. So that honestly could be it."

Silva bought the Yeti microphone he was looking for on sale.

Overall holiday sales are expected to grow this year. For the November and December period, the National Retail Federation, the nation's largest retail trade group, predicts that sales will increase between 8.5% and 10.5%. Holiday sales increased about 8% in 2020 when shoppers, locked down during the early part of the pandemic, spent their money on pajamas and home goods.

While Black Friday has a stronghold on Americans' imaginations as a day of crazed shopping, it has lost stature over the last decade as stores opened on Thanksgiving and shopping shifted to Amazon and other online retailers. Stores diluted the day's importance further by advertising Black Friday sales on more and more days.

The pandemic led many retailers to close stores on Thanksgiving Day and push discounts on their websites, starting as early as October. That's continuing this year, although there are deals in stores as well.

Still, experts believe Black Friday will again be the busiest shopping day this year. U.S. retail sales, excluding auto and gas, from this past Monday through Sunday are expected to increase 10% from last year and 12% from the 2019 holiday season, according to Mastercard SpendingPulse.

Restaurants: Whiplash Of COVID-19 Surges Driving Them Into The Ground

Quarterly Reports To Show How Companies Are Handling Inflation, COVID

The Robots That Are Coming For Our Jobs