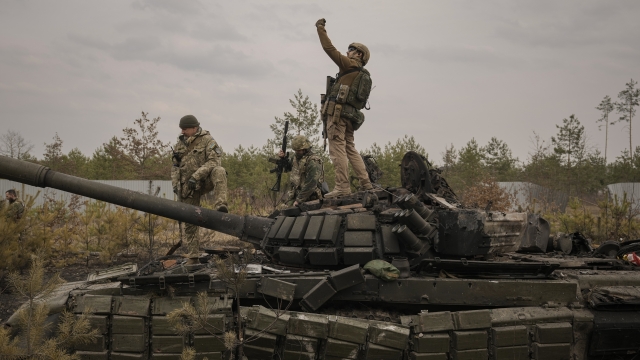 SMS
U.S. Javelin Missile System Plays Key Role In Ukraine's Defense
By Jason Bellini
By Jason Bellini
April 7, 2022
In the weeks leading up to the invasion, the U.S. made no secret of the high-tech threat Russia's armored vehicles would be up against.

Hundreds of tanks decimated. After Russia's army retreated from the suburbs of Kyiv, Ukrainian fighters are getting an up-close look at their scores won through pluck and leveraging of resources. The most celebrated of which, revered even, is the javelin anti-tank missile.

An artist dubbed "Saint Javelin" is the patron of Ukrainian resistance. Her image is helping to raise over a million dollars in merchandise sales, benefiting humanitarian aid.

To be sure, javelins, supplied by the U.S., are one of several anti-tank weapons systems that Ukraine is using to extract a heavy price from Putin.

"This is a class of weapons," CSIS International Security Program Senior Adviser Mark Cancian said. "The javelins are the top end. They're most expensive and the most effective."

The most effective for ambushing tanks and other heavy armor from a distance of up to two-and-a-half miles.

Here's how it works: An individual soldier uses the command launch unit to identify the target. When the missile is fired, a launch motor propels the missile out of the tube. The primary flight motor doesn't ignite until the missile is some distance away. This makes it more difficult for the enemy to identify the location of the person who fired it.

The javelin is known as a "fire-and-forget" system. An on-board computer guides the missile to the target. It can either be set to attack the tank head-on or go up and strike down at the top of the tank, where it's weakest.

According to a running tally from open-source intelligence experts — who base their count on videos and images — at least 450 Russian tanks in Ukraine have been either destroyed, damaged, abandoned or captured.

In the weeks leading up to the invasion, the U.S. made no secret of the high-tech threat Russia's armored vehicles would be up against.

"Analysts are scratching their heads about why the Russians are showing so little tactical skill," Cancian said. "Their doctrine and our doctrine says that if you're going to use armor, you use artillery ahead of them to suppress any infantry and anti-tank weapons. And you use reconnaissance to find out where they are. They don't seem to have done that."

Tanks are also vulnerable to fighter aircraft, but NATO and the U.S. say they won't engage Russia militarily, directly. That's why the javelins, along with advanced air defense weaponry, are proving so crucial.

"By using the right types of techniques and the right weapons systems, the javelin, the stingers have proven to be very, very effective in this fight," U.S. Defense Sec. Lloyd Austin said.

The problem for Ukraine is that they're going through their javelins fast and say they need more, fast.

Reports estimate that the U.S. has already sent them 4,600. And is dispatching an additional $100 million worth.

"As fast as we can, as much as we can, and just keep it going to make sure the Ukrainians can defend themselves," Asst. Sec. of Defense John Kirby said.

As the war grinds on, that means ramping up production.

"It's at its current production rate, which is quite high, but it can go higher," Army's Head of Acquisition and Logistics Doug Bush said.

The graveyard of Russian tanks in Bucha— near Kyiv — is small consolation for Russia's alleged war crimes there. But for Ukrainians, they're a symbol, along with the javelin, of their military, for now, beating the odds.