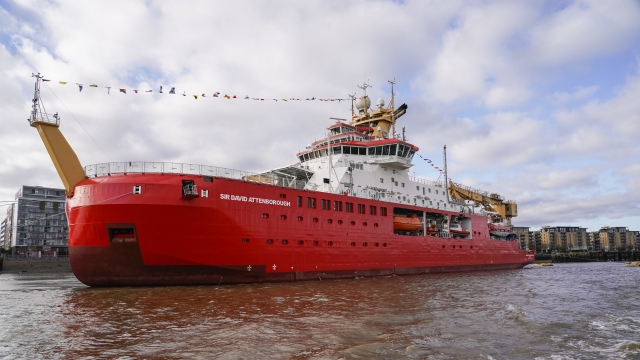 SMS
U.K. Polar Climate Change Ship Makes Its London Debut
By Newsy Staff
By Newsy Staff
October 28, 2021
The ship will set out to research how the Earth's atmosphere and oceans are warming.

A new climate change research ship is ready to undertake its first expedition.

The public originally wanted to call the U.K.'s ship "Boaty McBoat Face" in an online poll. But they were overruled by commissioners, who named the ship after British broadcaster Sir David Attenborough.

The ship will set out to research how the Earth's atmosphere and oceans are warming and the impacts the temperature rise will have on the ice-covered water and land of the Arctic and Antarctic.

Attenborough spoke on board the ship to remind people of the dangers caused by climate change.

He said, "We all know now the magnitude of the dangers that are facing us in the immediate future. Would it not be marvelous to suppose that as a consequence of our discoveries, and that science's discoveries, that the nations of the world join together and actually did something at COP (Conference of the Parties) in this coming conference? Let us see what it does, but I hope and pray that, my goodness, it takes action."

The RRS Sir David Attenborough is expected to make its first Antarctic mission later this year.