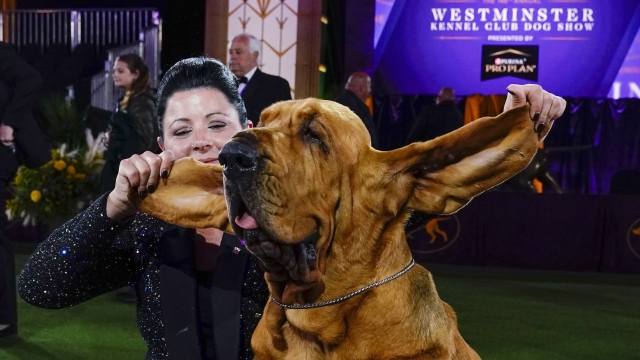 Now this hound has something to toot his horn about.

Rounding the finalists' ring with a poised and powerful stride, Trumpet beat a French bulldog, a German shepherd, a Maltese, an English setter, a Samoyed and a Lakeland terrier to take the trophy.

“I was shocked,” said handler, co-breeder and co-owner Heather Helmer, who also goes by Heather Buehner. The competition was stiff, “and sometimes I feel the bloodhound is a bit of an underdog.”

After his victory, Trumpet posed patiently for countless photos, eventually starting to do what bloodhounds do best — sniff around. He examined some decorative flowers that had been set up for the pictures, not appearing to find anything of note.

The seven finalists also included Striker, a Samoyed that also made the finals last year; River, a big-winning German shepherd; MM the Lakeland terrier; Belle the English setter, and a Maltese that clearly was aiming for stardom: Her name is Hollywood.

The competition drew more than 3,000 purebred dogs, ranging from affenpinschers to Yorkshire terriers. The goal is to crown the dog that most represents the ideal for its breed.

Usually held in winter at New York City’s Madison Square Garden, the show moved to the suburban Lyndhurst estate last year and this year because of the coronavirus pandemic.

Even for hopefuls that didn't come away with a ribbon, the event was an opportunity to showcase dogs and all they can do.