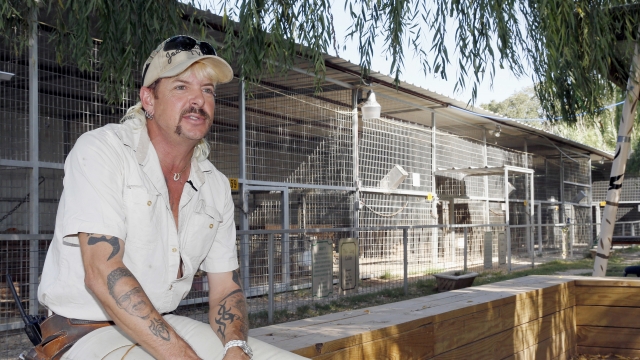 A federal judge resentenced “Tiger King” Joe Exotic to 21 years in prison on Friday, reducing his punishment by just a year despite pleas from the former zookeeper for leniency as he begins treatment for cancer.

“Please don’t make me die in prison waiting for a chance to be free,” he told a federal judge who resentenced him on a murder-for-hire charge.

Joe Exotic — whose real name is Joseph Maldonado-Passage — was convicted in a case involving animal welfare activist Carole Baskin. Both were featured in Netflix’s “Tiger King: Murder, Mayhem and Madness.”

Friday's court proceedings came about after a federal appeals court ruled last year that the prison term he's serving on a murder-for-hire conviction should be shortened.

The former zookeeper was sentenced in January 2020 to 22 years in prison after he was convicted of trying to hire two different men to kill Baskin. A three-judge panel of the 10th U.S. Circuit Court of Appeals agreed with Maldonado-Passage that the court should have treated them as one conviction at sentencing because they both involved the same goal of killing Baskin, who runs a rescue sanctuary for big cats in Florida and had criticized Maldonado-Passage's treatment of animals.

His attorneys said they would appeal both the resentencing and petition for a new trial.