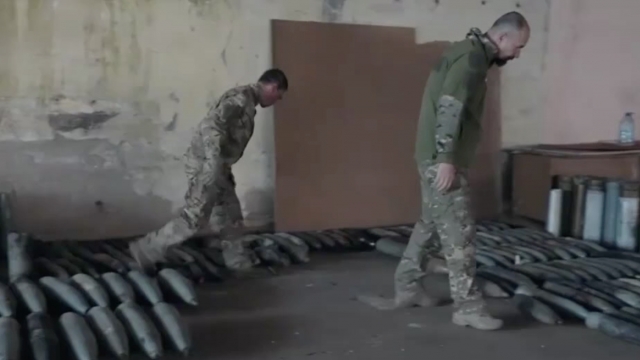 SMS
Thousands Of Unexploded Russian Munitions Sit In Secret Kyiv Warehouse
By Jason Bellini
By Jason Bellini
May 6, 2022
Russian weapons intended to kill and maim Ukrainians are set to be destroyed, but getting rid of unexploded munition is not an easy task.

It could be the world's most dangerous warehouse — filled with Russian weapons like missiles, rockets and anti-personnel mines that were intended to kill and maim Ukrainians. If they're mishandled, some still could.

Ukraine’s national police granted Newsy access to the warehouse, in an undisclosed location, where they’re temporarily storing the munitions that failed to explode.

Colonel Volodymyr Khomenko, chief of explosive ordnance disposal for the national police, gave the tour, stopping at one point to suggest we take a closer look at what's inside the anti-personnel artillery rounds. One was cracked open, showing it was packed with hundreds of small lethal metal darts known as flechettes.

“When one of these goes into your leg, you feel just a little pain, you see a drop of your blood, you could even close it with a bandage,” Khomenko says.  “But this flechette will stay inside and destroy your muscles and blood vessels.”

It's a brutal weapon of war rarely used in modern combat, but the Russians targeted Bucha with them. One shell can launch thousands of flechettes, which reportedly killed dozens of civilians in the Kyiv suburb.

Khomenko pointed out other weapons that human rights groups find especially nefarious, like pieces of a cluster bomb — notorious for not exploding on impact, but later exploding when civilians happen upon them.

This was just one of three warehouses that are filled with all these munitions. Some of them were weapons the Russians left behind in their cases, never used. Most of these are still dangerous. They still could explode. That’s why the Ukrainians have to get rid of them, and try to do it safely.

Khomenko plans to destroy most of the munitions next week.

There's much more of this to come in Kyiv.

Tymur Pstriuha, head of the non-government Ukranian Deminers Association, says his country now has the worst unexploded munitions problem in the world.

“Every fifth artillery shell has not exploded,” Pstriuha said.

NEWSY'S JASON BELLINI: Is there a particular situation that is most common when someone gets killed?

Kyiv-area police are getting training on what to do when called by residents, as they so often are, to check something out.

LT. COL. JOHN CULP: In some cases, they are making some mistakes.

CULP: Well, you know, approaching or picking up something or allowing a civilian to bring you something and hand it to you. You pick up something, it doesn't go boom. They give it to the police officer, he puts it in the trunk of his car, doesn't go boom, and he takes it to EOD. But there's always a chance of an accident happening in that case.

BELLINI: From what you've seen of the unexploded ordnance, anything that sort of surprised you?

CULP: I guess we're kind of surprised that a lot of the precision weapons that they use don't seem to work very well. You know, they're not very precise, and a lot of times they don't explode. And so you're faced with dealing with a lot of high explosive that's landed someplace and not going off.

There are no reliable numbers yet on the number of people killed in Ukraine by unexploded Russian munitions, and, in many parts of the country, they can’t even begin the collection process. Russian president Vladimir Putin's army is still launching rockets and laying mines.