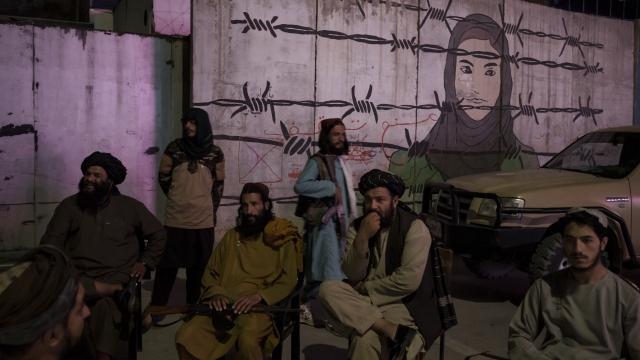 SMS
Taliban Enforcing Brutal Policies After U.S. Troop Withdrawal
By Ben Schamisso
By Ben Schamisso
September 28, 2021
Thousands of Afghan allies and around 100 U.S. citizens and residents are still hoping to get out of the country.
SHOW TRANSCRIPT

Chilling scenes in western Afghanistan include the Taliban hanging the dead body of an alleged criminal in the main square of Herat City.

The gruesome act signals a return to the group's brutal tactics of the past — and throwing into question its promise to change.

In another province, the Taliban banned barbers from shaving clients' beards Monday.

And on the same day in the capital city, the militant group barred women from attending Kabul University.

Meanwhile in the U.S., top military officials testified Tuesday they had advised President Biden to keep a few thousand troops on the ground to prevent a rapid Taliban takeover.

Gen. Frank McKenzie said, "I am confident that the president heard all the recommendations and listened to them very thoughtfully."

President Biden said last month he couldn't recall anyone advising him to maintain a small force in Afghanistan.

Military officials also admitted Tuesday there is "a very real possibility" Afghanistan could once more become a breeding ground for terrorism — and present a threat to the U.S. in the next 12 to 36 months.

"We must remember that the Taliban was and remains a terrorist organization and they still have not broken ties with Al-Qaeda," Gen. Mark Milley said.

Before the American pullout, the Taliban had pledged to end ties with enemies of the U.S. but the group has already broken many promises.

Back in Kabul, women's rights activists are bravely urging the Taliban to reopen schools to girls.

"We call on the authorities of the Islamic Emirate of Afghanistan to open the schools to girls as soon as possible," teacher Aqela Noori said.

Meanwhile, thousands of Afghan allies and around 100 U.S. citizens and residents are still hoping to get out of the country. The problem is, it's unclear who the Taliban are allowing to depart at the moment.