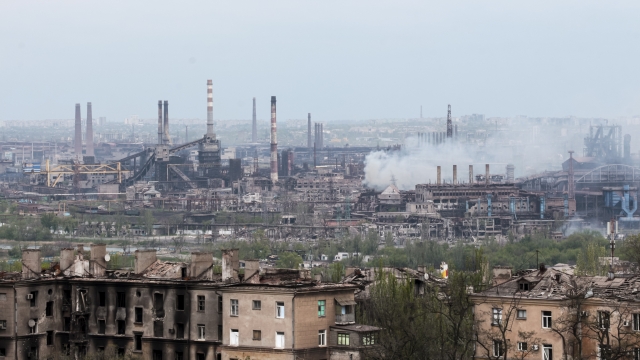 SMS
Russian Forces Appear To Have Breached Edge Of Mariupol Steel Plant
By Jason Bellini
By Jason Bellini
May 5, 2022
The development comes as a U.N. convoy moves closer to the steel plant in an attempt to help hundreds of civilians still trapped inside.

Russian forces outside Mariupol Azovstal Steel Plant in southern Ukraine appear to have breached the perimeter. And they may be making a final attempt at taking control.

New video shows military vehicles inside and a series of explosions.

"Yet again, the Russians have broken their promise of truce and have made it impossible to evacuate," said Captain Sviatoslav Palamar, who's stationed inside the steel plant.

The development comes as a U.N. convoy moves closer in an attempt to help hundreds of civilians still trapped inside.

According to an adviser to Ukraine's internal affairs ministry, an electrician who knew the plant's layout aided the Russians.

"He showed them the underground tunnels which are leading to the factory," he said.

NEWSY'S JASON BELLINI: Do you think those soldiers and civilians who are down there will make it out alive?

MYKOLA MALOMUZH: They have a chance of surviving if we provide a special operation for their liberation. We proposed to President Zelenskyy that he organize several powerful counter-attacks at night, landing special forces in Mariupol, destroying Russian troops and liberating those people. Our political leaders still haven’t decided to do this. They should have done it two weeks ago.

Zelenskyy says more than 300 people were rescued over the past day.

He says efforts to free more are slow because people are trapped under debris.

He says he still hopes quote "everything will work out."

It appears there are about 2,000 Ukrainian fighters holed up under that steel plant.

They are the ones fighting back as Russian troops continue trying to force their way inside.

Despite video evidence proving otherwise, the Kremlin says its troops aren't storming the plant at all.