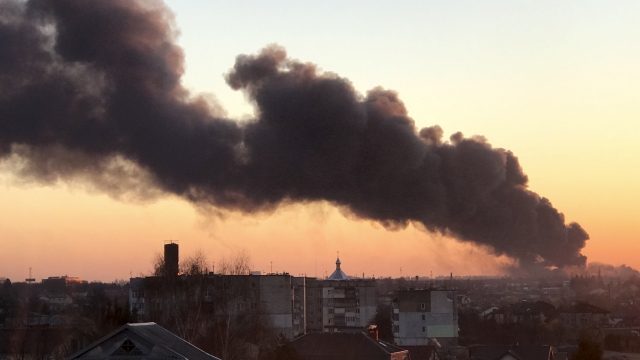 SMS
Russia Attacks Outskirts Of Ukraine's Western City Of Lviv
By Jason Bellini
By Jason Bellini
March 18, 2022
This is the closest that any Russian attack has come to central Lviv — a city that's overflowing with people from all over the country seeking safety.

The sense of security in Ukraine's western part of the country near Poland is waning Friday, as signaled by the smoke. Smoke is coming from an aircraft repair facility. Four Russian cruise missiles destroyed it.

The missiles struck an airport around 6:00 a.m. local time. This is the closest that any Russian attack has come to central Lviv — a city that's overflowing with people from all over the country seeking safety.

The region's governor said Friday that nearly 200,000 people have fled to this city from other war ravaged parts of Ukraine.

Friday morning's attack is a stark reminder of Lviv's vulnerability. Out of six missiles launched, Ukraine's military says it shot down two. And that underscores why Ukraine is so desperately seeking air defense weaponry.

"We are willing to do so immediately when we have a proper replacement," Slovakia Defense Minister Jaroslav Naj' said. "The only strategic air defense system that we have in Slovakia is the S-300 system. So what would happen immediately when we decide to give it to the Ukrainians, is that we actually create a gap, a security gap in NATO."

In an effort to protect the skies over Ukraine's capital, the country's military continued its offensive to push back Russian artillery, which has been lobbing shells and destroying high rises in Kyiv on a daily basis.

Ukrainian forces said on Friday, they retook control of a village near Kyiv.

Soldiers examined damaged Russian vehicles and discovered items thought to have been taken by Russians during their occupation.

With the continued blasting of Kyiv in the north, the destruction of Kharkiv's cityscape in the east, the bombing of shelters in Mariupol in the south and today's attack in the west, death is in every direction.

Including the deaths of children in Lviv Friday, 109 empty baby strollers were placed in the city square symbolizing the death toll of this war's youngest victims.

The heartbreaking display is a reminder of the devastation in yet another week of war in Ukraine.