Revolt: When It Rains 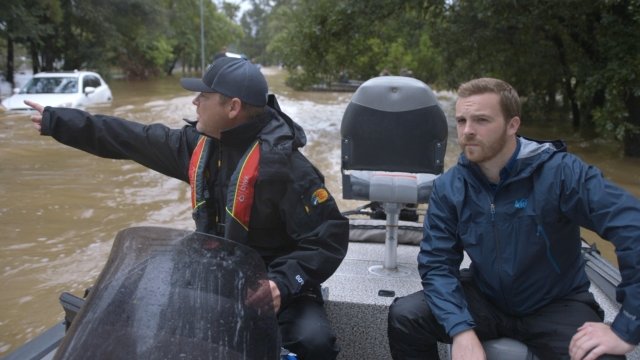 The future of American energy will shape the future of our climate. That's clearer now than ever, as researchers link the greenhouse gases pumped into our atmosphere to the Earth's increasingly severe droughts, floods and extreme weather events.

Our new series "Revolt" explores these issues in a fresh context that's focused on Middle America. This is the first of six episodes that will debut weekly every Monday.

Full source list and bibliography:- Drought forces North Dakota ranchers to sell cattle — The Bismarck Tribune - "Wildfires ravaged the western half of the country this year, with more than 47,000 fires burning up an area larger than the state of Maryland." — The Washington Post- "We've just run through our three warmest years on record." — National Oceanic and Atmospheric Administration- "What we see in the projected climate toward the end of the century if we keep using fossil fuels and add more greenhouse gases to the atmosphere, is that regions that don't normally experience drought, something that might be a once in a 50-year event, could happen a couple times a decade." — NASA- "Those greenhouse gases build up in our atmosphere and trap heat that would otherwise escape." — U.S. Environmental Protection Agency- "We've put a lot more of those gases into the atmosphere just in the last 100 years or so. And historically, as greenhouse gases go up, so does the Earth's temperature."— National Academies of Science, Engineering, and Medicine- "The most important of those greenhouse gases are carbon emissions." — Union of Concerned Scientists- "And according to a new study, 71 percent of global carbon emissions come from just 100 companies." — CDP Worldwide 2017 Carbon Majors Report, The Guardian- "Fires, droughts and hurricanes: What's the link between climate change and natural disasters?" — Los Angeles Times- "Hurricane Harvey alone pushed more than 30,000 people from their homes." — Los Angeles Times- "Across the Gulf and Caribbean, 2017 brought one of the deadliest and most costly hurricane seasons on record." — Time