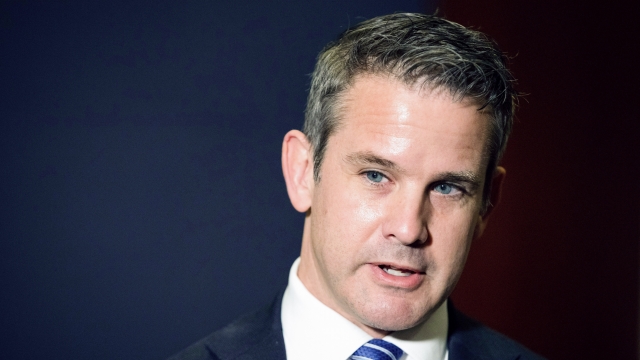 SMS
GOP Trump Critic Rep. Adam Kinzinger Won't Seek Reelection
By Gabriella Nunez
By Gabriella Nunez
October 29, 2021
The Republican has been increasingly critical of his own party since a mob of Donald Trump supporters stormed the U.S. Capitol.

Republican Rep. Adam Kinzinger of Illinois, a critic of Donald Trump's who is on the panel investigating the deadly Jan. 6 Capitol attack by the former president's supporters, announced Friday that he will not seek reelection next year.

The military veteran, who has represented his northern Illinois congressional district since 2013, was one of 10 House Republicans who voted to impeach Trump on a charge of inciting the insurrection at the Capitol. Kinzinger joins GOP Rep. Anthony Gonzalez of Ohio as one of the 10 who have decided to bow out of Congress.

The Illinois Republican announced his decision in a video, saying the "time is now" to move on. "My disappointment in the leaders that don't lead is huge," he said.

Kinzinger, 43, hinted at other political plans, saying: "I cannot focus on both a reelection to Congress and a broader fight nationwide. I want to make it clear this isn't the end of my political future, but the beginning." He also noted that he got married recently and that he and his wife are expecting a baby boy in January.

The announcement came hours after Democrats in Illinois approved new congressional district maps that put Kinzinger in the same district as GOP Rep. Darin LaHood, a strong supporter of Trump's who said Friday he plans to seek reelection. The former president's influence remains strong on GOP voters, and Kinzinger's criticisms of Trump would have been difficult to overcome in a primary for a district drawn to be heavily Republican.

Trump said in response, "Two down, eight to go!"

Kinzinger has been increasingly critical of his own party since Jan. 6, when a mob of Trump supporters stormed the Capitol in a bid to stop Joe Biden from becoming president. Kinzinger, at the invitation of Democrats, defied his leadership to join Republican Rep. Liz Cheney of Wyoming as a member of the House committee investigating the attack.

He said that the country is "poisoned" and that "we must unplug from the mistruths we've been fed."

Republicans are well positioned to pick up the House majority in next year's midterm elections, but the departure of Kinzinger and other more traditional conservatives casts a shadow over the party.

Kinzinger formed a political organization, Country First, to support candidates who oppose Trump and see him as a threat to democracy. He said in the video released Friday that "I know I'm not alone — there are many Americans desperately searching for a better way."

"They want solutions, not more problems. They want action, not extremism. They want light, not darkness. And the sooner we do it, the better it will be for the land that we love," he said. "Now is the time to put country first."

Former Illinois Republican Party Chair Pat Brady, a Trump critic, called Kinzinger's departure from Congress a "huge loss" for the party and voters in Illinois. He said Kinzinger is "the kind of Republican we need more of."

He also decried a redistricting process that is creating more partisan districts across the country, making primary elections the main battleground for a seat in Congress and resulting in the politicians sent to Washington holding more extreme positions and having less incentive to work with the opposing party.

"There's just not enough people in the middle anymore," Brady said. "It's not working, and it's contributing to the rancor we need to stop."