Volodymyr Zelenskyy: Before And After Witnessing Horror Of Bucha 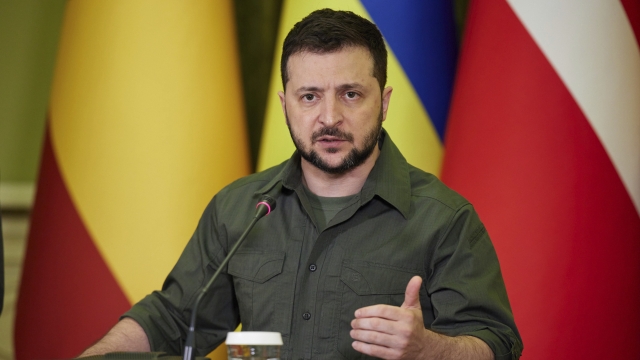 SMS
Volodymyr Zelenskyy: Before And After Witnessing Horror Of Bucha
By Jason Bellini
By Jason Bellini
April 21, 2022
The horror of Bucha stiffened the spine of the West — weapons came faster and they're more powerful now.

The story of war is written on the faces. A grieving widow. A motherless child. An exhausted firefighter. And Volodymyr Zelenskyy, the day he went to Bucha, aged in an instant by what he had seen. It was a transformative moment.

"Every day we find people in barrels, caves, strangled, tortured," he told reporters that day.

The horror of Bucha stiffened the spine of the West — the weapons came faster and they're more powerful now.

Putin's veiled threats of nuclear retaliation seem less frightening, outweighed by the moral imperative to respond to the atrocities.

And it completed the transformation of Zelenskyy from the lighthearted leader he was when he came to power three years ago.

A lightness still there in Kyiv in the early days of the war evolved into the personification of grim determination.

A woman he met in Bucha put it this way: "Volodymyr, thank you for staying with the people, for not leaving. Everyone is grateful to you, so you know."

Zelenskyy responded, saying: "You did a great job. You have withstood it!"