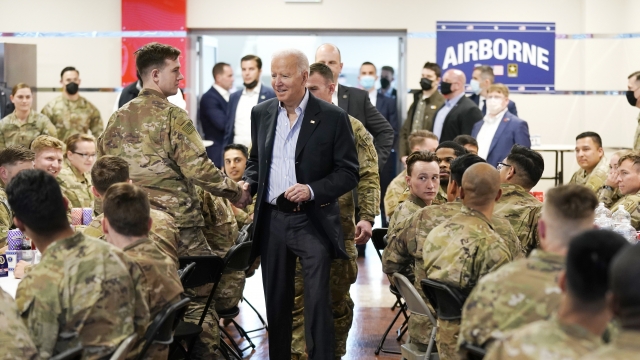 Air Force One touched down on what may be the world's most strategically important airport.

This small Polish regional airport 60 miles from the border — where President Joe Biden landed on his way to see U.S. troops — is the primary routes in for military supplies bound for Ukraine.

Billions of dollars worth of high-tech military equipment landed before being delivered by road on secret routes to Ukrainian fighters repelling Putin's army.

And that's why Rzeszow's airport is most certainly on Putin's radar. Arms shipments, he's said, are legitimate targets.

By coming here, President Biden puts an exclamation point on his oft-repeated position — Poland, a NATO ally, is protected.

Protected, as of earlier this month, by one of the most advanced defense systems on the planet — U.S. Patriot missiles that are pointed east toward Ukraine from the airport.

It's the kind of weaponry Ukraine wishes — is indeed begging for — to help counter Russia's aerial onslaught. Patriots are designed to hunt down and destroy incoming short-range ballistic missiles, advanced aircraft and cruise missiles

They're meant to serve as a deterrent to Russia spreading the war west into NATO territory.

But their mission, like that of the troops President Biden met today, stops at the border.

"We got 100,000 American forces here in Europe," he said. "We haven't had that in a long, long time. Because we are the organizing principle for the rest of the world. And I said, 'We sent the best, the best available in America.' And that's all of you, women and men."

The president offered his hand and his gratitude to the members of the 82nd Airborne.

They offered him pepperoni and jalepeño pepper pizza.

Not on offer, guidance on when they'll get to go home to their base in Fort Bragg, North Carolina.

And as the sun set on Rzeszow, Poland, Air Force One took off, flying the opposite direction of the border that America will not cross.