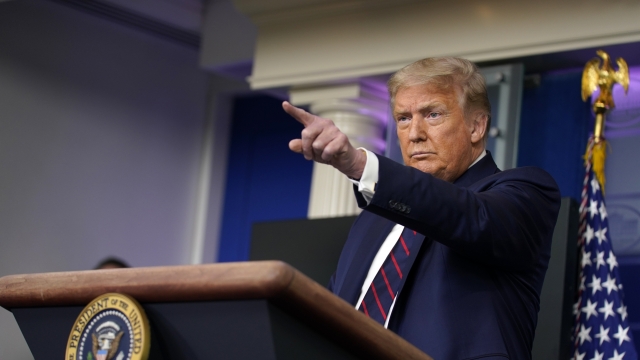 By Willie James Inman
July 24, 2020
With about 100 days to go before Election Day, President Trump is making major shifts in messaging, and his campaign is ramping up grassroots support.
SHOW TRANSCRIPT

President Donald Trump is focused on resetting his campaign amid sagging poll numbers in the final stretch of his reelection bid. With just over three months until Election Day, the president replaced his campaign manager, started holding coronavirus briefings again, and announced the cancellation of a major part of the Republican National Convention in Jacksonville, Florida.

"We won't do a big crowded convention per se, it's just not the right time for that. I care deeply about the people and everywhere else, frankly, in this country and even in the world who would be coming into the state, and I don't want to do anything to upset it," said President Trump.

"We see President Trump responding first of all by shaking up his campaign staff by replacing Brad Parscale with [Bill] Stepien. And also, he's hiring on some new people at the very top," said Todd Belt, director of the political management program at The George Washington University. "We see a big change in terms of his wanting to wear a mask now and wanting to restart the coronavirus briefings, albeit all by himself, so he can keep the message that he wants."

Nearly all polls show President Trump trailing presumptive Democratic nominee Joe Biden. And in modern history, incumbent presidents with approval ratings under 40% the summer before an election have not been reelected. Republican George H.W. Bush had an approval rating of 37% the June before he lost the 1992 election. Democrat Jimmy Carter sat at just 32% at a similar point in 1980. President Trump's June Gallup poll approval rating was 38%.

Still, polls have shown some good news for Trump. 91% of those who support him say they are very or somewhat enthusiastic about his candidacy. 77% of Joe Biden supporters say the same. And the Trump campaign feels it can turn that enthusiasm into votes.

"Our message is to take this message, this agenda of putting America first for every American in every corner of this country, and mobilizing on this campaign what is the largest grassroots in American political history," said John Pence, a Trump 2020 senior adviser.

Republicans also enjoy a spending advantage, though Democrats have closed the gap in recent months. The Trump campaign, along with the Republican party and attached fundraising committees, has spent a historic $983 million since 2017 — when President Trump began raising funds for his reelection. Some of that money is being used to run TV and digital ads. And with large-scale rallies on hold at least for now, Republicans are also focused on getting their message out to voters through community organizers.

"This Republican message and message of freedom, security and opportunity is a message that we bring into communities with our Neighborhood Team Leader initiative, with finding and working with local community leaders to get out the vote and to support a Republican agenda to put America first for every American," Pence added.

Pence also says the party has registered double the number of voters compared to the same period in 2016, and the campaign is ramping up outreach in battleground states. And with still about 100 days until the election, there may be enough time for the president to improve his standing with voters.

"He's obviously gone with the law-and-order thing and talked about the looting. But I think a little bit more empathy on the president's part and talking about and understanding the problems people are going through can actually go a long way to recasting himself as a leader who cares," said Belt.