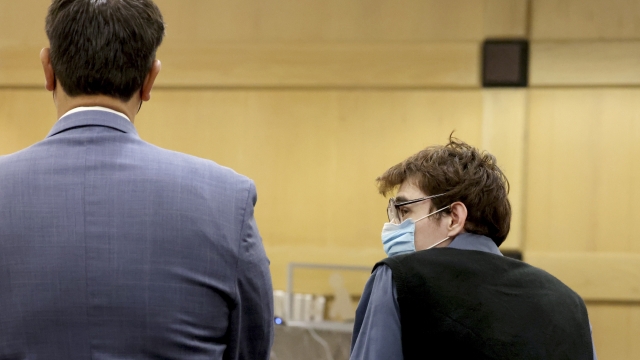 SMS
Parkland School Shooting Suspect Pleads Guilty On All Counts
By Haley Bull
By Haley Bull
October 21, 2021
The school shooter changed his plea to guilty for 17 counts of murder and 17 counts of attempted murder for the massacre at the Florida High School.
SHOW TRANSCRIPT

Tony Montalto: "There’s no moving on there’s moving around the pain that we feel every day."

But inside a courthouse, the case met an admission of guilt in front of victims families.

Judge: "To count one murder in the first degree of victim Luke Hoyer how do you plea?"

The school shooter changed his plea to guilty for 17 counts of murder and 17 counts attempted murder for the massacre at Marjorie Stoneman Douglas High School. Prosecutors walked through detail by detail the actions, and each victim.

Debbi Hixon: "Twelve shots, eight shots, three shots — that’s not someone who was at all remorseful for what he was doing."

The gunman asked to speak- saying this:

Words that carried no meaning for family here.

Fred Guttenberg: "Irrelevant and we’re just one step closer to justice. I’ve got to go see my daughter."

Gena Hoyer: "That was useless. They’re going to use any words he used today in their defense to not get the death penalty."

Tony Montalto: "As a society we should want people who committed heinous acts like mass shootings to be prosecuted to the fullest extent of the law. We need to find a way to prevent people from wanting to copy these things."

The defendant now faces up to the death penalty — a jury expected to hear arguments next year.

Nothing can change what happened. But families leave this court room with a focus they’ve always had: on their loved ones.

Debbie Hixon: "We should be honoring the victims."

Tom Hoyer: "You go through that age and we’re sort of just getting on the cusp of what they’re gonna be. We’re not gonna see what he’s gonna be."