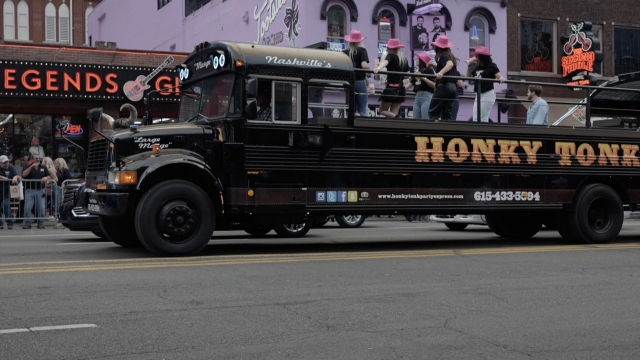 The music pumping from the bus stereos is a lot different from the authentic country music that flows through the air in Nashville's tourist district.

There's no denying party buses, tractors and other entertainment vehicles are a tourist favorite in Nashville — or at least to some.

"There is a lot of trash, loud, explosive music, dirty, raunchy," Stephen Hughes said. "Somebody needs to put some regulations on these people."

Starting Dec. 1, that's exactly what's going to happen. The city of Nashville is now stiffening safety rules that could shut down many of these operators.

The first thing to go is alcohol on vehicles, like buses without roofs.

Joey Langford came down to have a good time with friends in Nashville.

"You know, you can go around town, hang out with people, get hammered and you know, have fun," he said.

But he and his friends agree sometimes they need a little outside management.

"They should be regulated to a certain extent," Langford said.

Visitor Conor Hogan said: "There definitely should be a responsible figure to make decisions for this because if we're losing lives, the young lives of America, that should not happen in a great city like Nashville."

The list of other regulations scheduled to roll out in April 2022 includes background checks for business owners and drivers, noise regulations, permanent routes for vehicles to operate, and random safety and maintenance inspections.

Some question the new rules, saying they're crushing small startups.

"If you can't meet the performance standards of the city of Nashville that we've started to establish here then you probably shouldn't be doing business here," Metro Council Member Freddie O'Connell said.

Regulators point to tragic incidents that could have been prevented.

This summer, police say a vehicle ran over a 22-year-old man's legs after he fell off a roof-less party bus.

Investigators say he was sitting on the railing and landed face-first onto the pavement.

"I believe that it should be heavily regulated," Hogan said. "Like being a 20-, 22-, 23-year-old, it's hard to make responsible mature decisions, definitely on a party bus when you're under the influence of alcohol."

Starting in April, these party vehicle companies will have to meet those other requirements. Some say they may have to roll out of town.