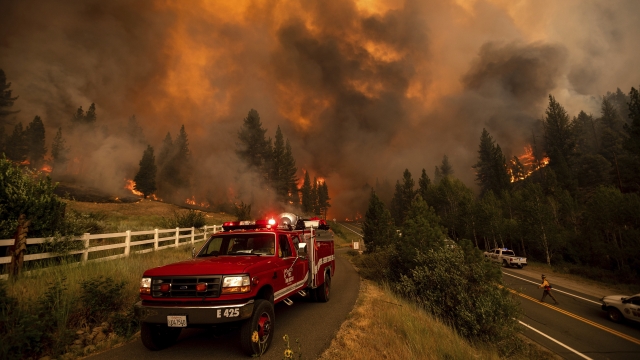 The largest wildfire in the U.S. torched more dry forest landscape in Oregon on Sunday, one of dozens of major blazes burning across the West as critically dangerous fire weather loomed in the coming days.

The destructive Bootleg Fire just north of the California border grew to more than 476 square miles, an area about the size of Los Angeles.

Authorities expanded evacuations that now affect some 2,000 residents of a largely rural area of lakes and wildlife refuges.

The blaze, which was 22% contained, has burned at least 67 homes and 100 outbuildings while threatening thousands more. At the other end of the state, a fire in the mountains of northeast Oregon grew to more than 17 square miles by Sunday.

The Elbow Creek Fire that started Thursday has prompted evacuations in several small, remote communities around the Grande Ronde River about 30 miles southeast of Walla Walla, Washington. It was 10% contained.

Natural features of the area act like a funnel for wind, feeding the flames and making them unpredictable, officials said. 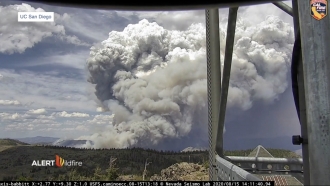 In California, a growing wildfire south of Lake Tahoe jumped a highway, prompting more evacuation orders, the closure of the Pacific Crest Trail and the cancellation of an extreme bike ride through the Sierra Nevada.

The Tamarack Fire, which was sparked by lightning on July 4, had charred nearly 29 square miles of dry brush and timber as of Sunday morning.

The blaze was threatening Markleeville, a small town close to the California-Nevada state line. It has destroyed at least two structures, authorities said.

Meteorologists predicted critically dangerous fire weather with lightning possible through at least Monday in both California and southern Oregon. 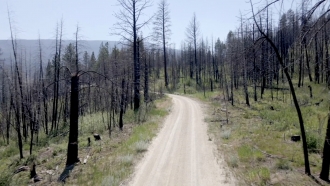 Extremely dry conditions and heat waves tied to climate change have swept the region, making wildfires harder to fight. Climate change has made the West much warmer and drier in the past 30 years and will continue to make weather more extreme and wildfires more frequent and destructive.

There were about 70 active large fires and complexes of multiple blazes that have burned nearly 1,659 square miles in the U.S., the National Interagency Fire Center said. The U.S. Forest Service said at least 16 major fires were burning in the Pacific Northwest alone.

What's Next For The National Labor Shortage?