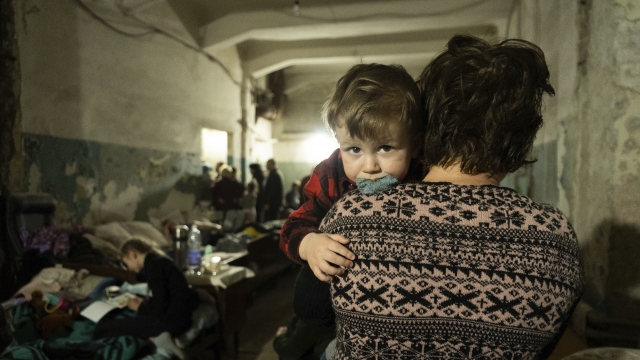 A city "reduced to ashes" is how Ukraine's president describes Mariupol.

Now stories are emerging from Mariupol, which indicate that a sizable part of the population may have been trapped inside these buildings when Russian missiles, mortars and bombs struck. Many of them dying, unrecovered, uncounted because they were unable to seek shelter in basements.

A new report from Human Rights Watch documents the toll on Mariupol's most vulnerable.

"The most horrific to hear about is the experience of people with disabilities, older people, who unlike everyone else that we spoke to — who spent their time sheltering in basements trying to avoid the bomb blasts and keep safe — for these people that simply wasn't an option," said  Belkis Wille, Human Rights Watch senior crisis and conflict researcher.

BELKIS WILLE: You know, I interviewed a man in his 80s who lived on the sixth floor of his building. And he described to me how, for those two weeks, he simply sat in his apartment on the sofa, looking outside the window as explosions were going off and extremely scared that that these would be his last moments.

JASON BELLINI: Don't they have friends, neighbors who are concerned about them that would help them go get down into the basement?

WILLE: For these people that we spoke to, they explained that because the attacks, the shelling were so frequent, they would have had to be going up and down, up and down constantly, and it was just not feasible for them. ... And a lot of them raised concerns about using the bathroom. Because of their condition, particularly those with disabilities and those who use a wheelchair, they weren't able to use a bucket in the basement, which is how everyone else was using the bathroom and so they had to stay in their apartments.

Survival for the elderly can be a matter of luck that their buildings aren't hit before they're rescued from the city.

It took five days of travel for one wheelchair-bound 77-year-old woman to reach Poland. She described what Mariupol looked like as she escaped.

"Almost 90% of the city has been destroyed," Mariupol resident Maria Fiodorova said. "There are no buildings there anymore."

Not since World War II has Europe experienced this kind of devastation of a city.

"During the last five days, planes were flying over us every five seconds," said Mariupol resident Viktoria Totsen.

Even those sheltering below ground sometimes must venture out at their peril.

One survivor was near a line to get water.

"Bombs fell down and killed like three people in front of us," Mariupol resident Dmytro Shvets said. "One guy was without a head."

The death toll in Mariupol remains unknown but with so many trapped above ground the number of dead could be even higher than imagined as their homes are bombed into hulks of charred concrete, metal and ash.