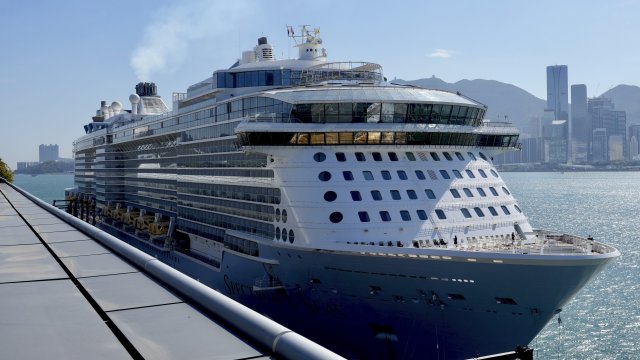 Cynthia and Christopher Siegle document their travel experience on YouTube. It’s a new practice, though the Siegles say they aren’t new to cruising.

They documented their most recent trip through the Caribbean.

They knew cruising during COVID might look different. They described more precautions, masking, less capacity on board and canceled ports. But what they didn’t expect was to film people transported by people in head to toe PPE to another vessel.

“This is not something we had seen before so it was just shocking. The visual of seeing crew members being walked out and stuck into the back of buses and hauled away it was shocking,” said Christopher. “There was no mention of it,” Cynthia added.

“Once we started talking to the crew and realizing what happened and what they were actually doing it made us feel a lot better,” Cynthia said.

The question the family still had, was how many cases were on board.

The cruise industry isn’t immune as COVID surges once more with the omicron variant. It’s left major companies holding off on some voyages.

Royal Caribbean International said in an abundance of caution it paused operations on four ships and a return to cruising on another. The company cited “ongoing COVID-related circumstances around the world.”

“We regret having to cancel our guests’ long-awaited vacations and appreciate their loyalty and understanding," the company said in a statement. "Our top priority is always the well-being of our guests, our crew and the communities we visit. Despite stringent health and safety measures, including vaccination and testing requirements for guests and crew, and extensive contingency planning, we have had to move forward with this decision. Guests booked on these canceled sailings are receiving assistance and compensation options, including a full refund."

Norwegian Cruise Line listed a dozen vessels online with affected sailings, citing ongoing travel restrictions. It states on its website, “The health and safety of our guests, crew and communities we visit is our number one priority.”

A spokesperson for Carnival Cruise Line said they haven’t canceled or rescheduled any cruises due to COVID. They said guests who test positive are isolated and that there is close contact tracing and testing. They said crew who test positive are isolated on board and most moved off during turnaround if they still have quarantine time left, and that their close contacts are also identified, tested and placed in quarantine. The spokesperson said they use ships not in operation for crew when necessary. Right now there are three ships not in service.

“My thoughts are that we are gonna see lots and lots of continued cancellations,” said James Walker.

Walker is an attorney who represents crew and passengers against cruise lines and runs a cruise law blog. He described what he hears from crew members.

“Some have no complaints. People who are asymptomatic see it as part of their job they have to put up with. We have lots of complaints though from crew members who would prefer not to be stuck on a quarantine ship at sea. Remember these are not luxurious cabins with balconies,” Walker said.

At the start of the year, the Centers for Disease Control bumped up the travel health notice to level 4 for cruise ship travel. The agency recommend avoiding cruise travel, regardless of vaccination status.

Dozens of vessels meet the threshold for CDC investigation. The threshold for an investigation includes cases in at least 0.10 percent of passengers or in at least one crew member. While the numbers aren’t publicly released, the director of the CDC told senators Wednesday that with the Omicron variant, cases increased 30-fold on cruise ships the past two weeks.

Despite this, the agency plans to transition to a voluntary risk mitigation program for foreign flagged cruise ships when the temporary extension of the conditional sailing order expires Jan. 15th.

“While I anticipate that with ships following conditional sail order we still will continue to follow do the oversight and watch and do all the technical assistance and support in every single way," Dr. Rochelle Walensky, the agency’s director, told senators.  "We anticipate that this order will not be renewed and that the cruise ship industries will continue to understand that this is a really safe practice for those industries. What I can’t predict is what the summer will bring."

The agency said the program “… includes recommendations and guidance for cruise ships to continue to operate in a way that provides a safer and healthier environment for crew, passengers, and communities.” It said cruise ships who choose to participate will follow recommendations and guidance “…aimed at reducing the introduction and spread of SARS-CoV-2, the virus that causes COVID-19.” The agency’s maritime unit will work with those cruise ships to monitor preventative measures and cases onboard, the agency said through “daily enhanced data collection and inspections.”

“Even though the numbers have gone up, CDC is still moving forward with transitioning from the conditional sailing order to the voluntary program and I think that signals a level of confidence in the way the industry has approached its public health responsibilities on board ships,” said Brian Salerno, the senior Vice President of maritime policy for Cruise Lines International Association.

It comes nearly two years after the start of the pandemic, when the cruise industry came to a halt and later took on new oversight to restart.

“As we’ve seen in Florida where it’s already voluntary most cruise lines are doing that, they are following the CSO voluntarily. So I don’t think it’s gonna be a dramatic change,” Salerno said. “Our hope is whatever the voluntary program contains it will be agile enough to respond to changing conditions in the months ahead. Because we will get through omicron, we will get back on I say a normal resumption trajectory and we would just hope that the voluntary program is agile enough to respond to those changing conditions.”

“Early detection and rapid response, taking the  appropriate measures in accordance with CDC guidelines is something that is what allows the industry to continue even in the midst of this pandemic and allows the overall rate to be something that is very manageable on board a cruise ship,” said Salerno.

Frank Rebelo’s New Year’s cruise didn’t end the way he would have liked.

“They did not want to know who we were with,” Rebelo said.

He said he tested positive while on board a Norwegian Cruise Line trip to the Caribbean. He described concerns with the steps he saw with contact tracing and service.

“It was every day going no we don’t have to pay for water for every time you ordered water,” said Rebelo.

“So just not prepared, not, withholding information so the truth of the potential risks of cruising are out there. Those were my biggest problems with it,” he said.

Heather Silvis said she was on a different vessel when COVID hit her party, too. She also raised concerns about masking, care a party member received, testing, contact tracing and confusion disembarking the ship.

“They never told any of us that we needed to quarantine. We actually didn't receive a letter asking us to stay in our cabin until the morning of the third of January which is the day we were getting off the boat,” said Silvis.

The cruise line did not response to our requests for comment. However, on their website Norwegian Cruise Line explains if a positive case is identified that they begin contact tracing immediately, and that it will occur at the same time as treatment.

But other families are still boarding cruises and describing good experiences.

The Norwegian Dawn is on a list of vessels affected. It dropped off passengers at the end of their cruise in Tampa this week.

”The service was great. Saw no signs of any type of communicable diseases at all on the ship,” said Timothy Feeley.

“Some ports you couldn’t get off unless you had an excursion. Everything was changing daily but the weather was beautiful, met some great people,” said Helen Fisher.

The CDC expects cruise lines to decide whether to participate in the voluntary program in the upcoming week.