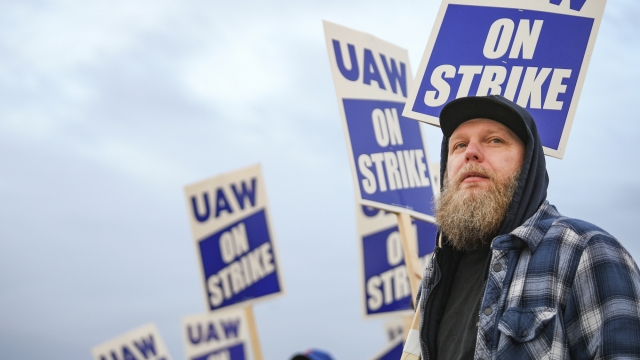 Across the country, thousands of workers from Kellogg's to John Deere, industry to Hollywood are demanding better pay, better working conditions and better benefits.

"You have workers that have been called heroes, right, and essential — by politicians, by business leaders — and they’re not seeing anything in their real life to reflect that talk," said Ron Ruggiero, president of SEIU Local 105.

A groundswell of workers are organizing to demand change.

"Wealth and income inequality have been persistent themes," said Mark Hamrick, senior economic analyst at Bankrate. "The pandemic and the related economic downturn exacerbated those issues."

Will McQuillen is a pilot for Alaska Airlines. His union group just sent a letter to their CEO demanding new language for parts of their contract that haven't changed since 2013, and better flexibility in their schedules.

"The issues that we're trying to address go back, actually much longer than the current contract cycle," McQuillen said. "It's an area that's actually been cited in exit interviews with pilots as they've left as reasons for leaving here at the airline, that they just couldn't achieve the work-life balance that they needed."

The pilot group sits in the middle of mediation with their management but doesn't actually have any talks scheduled.

McQuillen said they "would never want to strike," however they "are prepared to strike if that's where the process leads us."

Pew Research analytics show earnings for employed workers is overall largely unaffected by the pandemic, but the impact is disparate based on income.

Lower-wage workers are seeing steeper job cuts, and purchasing power has been holding steady as the crisis slowed inflation.

Ashish Prashar, who is an activist and marketing executive, thinks this is "a good story for all of us."

"People have realized that they have bargaining leverage, and they're asking employers and our economy to do much better right now," Prashar said. "I think it all starts with legislation. I think it really does start there. All of these strikes, all this pressure from both corporate and everyday workers is going to put pressure on our government to ensure workers rights."

McQuillen said, "We were able to work productively with the company during the pandemic to broker solutions that not only saved pilots' jobs, and we were one of the first airlines to do that, but also provide the company the flexibility they needed to be able to recover from the pandemic."

One picture in a tapestry of unions demanding change.

"People have worked though this pandemic and they have been called essential," said Charlie Wishman, president of Iowa Federation of Labor. "But unfortunately, they have been treated as expendable."

Correction: This story has been updated to reflect that Alaska Airlines pilots have had new contracts since 2013, but none that change parameters set in that year, with which the pilots have concerns.

Tracking Down Counterfeit Goods On Amazon