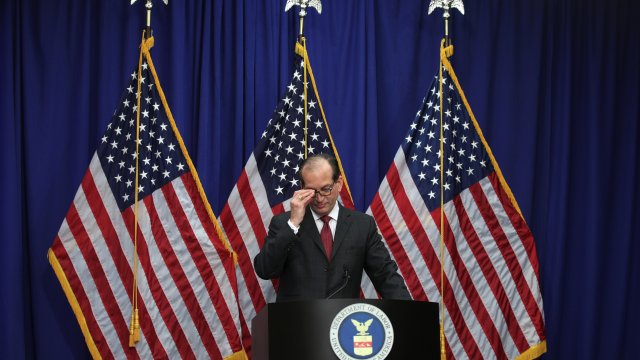 SMS
Labor Secretary Alex Acosta Defends Role In Epstein Prosecution
By Alec Larson
By Alec Larson
July 10, 2019
​The case, and Acosta's role in an eventual deal, are in the spotlight after Epstein was charged with operating a sex trafficking ring.
SHOW TRANSCRIPT

On Wednesday, Labor Secretary Alex Acosta defended his role in Jeffrey Epstein's prosecution a decade ago amid accusations of prosecutorial malfeasance related to Epstein's eventual deal in the case.

At a press conference, Acosta acknowledged the complexity of the case and argued that had his office not stepped in, there was a chance Epstein could have gone free.

Despite accusations that he gave Epstein a "sweetheart" deal, Acosta said that he accomplished his three main goals in the agreement: jail time, registry on the sexual offenders list, and reparations for the victims.

The case, and Acosta's role in the eventual deal, have come back into the spotlight after Epstein was charged with operating a sex trafficking ring and sexually assaulting dozens of underage women. Acosta gave his support for the further prosecution of Epstein at the press conference.

"Epstein's actions absolutely deserve a stiffer sentence. He should be prosecuted in any state in which he committed a crime," said Acosta.