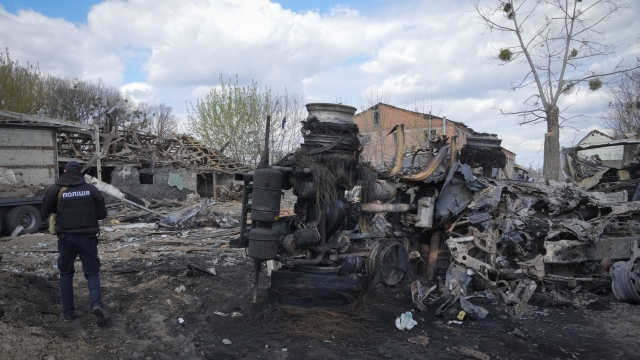 In the light of day, what rescue workers feared: From the wreckage of a Kyiv apartment building, they carried out the body of a 55-year old woman killed by the Russian cruise missile.

Vira Hyrych worked as a producer for Radio Free Europe, or Radio Liberty, which is a U.S. funded news agency.

She lived in a new building that was still only partially occupied.

"She just bought the apartment. She was so eager to move in as soon as she could," he said. "My colleague kept calling her all night and then this morning she went there to the site."

That colleague alerted rescue workers, asking them to check her apartment.

"They did and they found her body," Runets continued. "Probably I'm in the phase of denial right now. It's difficult to say things about [a] person you know so well, and then suddenly there is no such person."

Emergency workers also cleared debris, looking for her belongings. Police then carried them in two plastic bags, adding her Ukrainian passport and some other documents into one of them.

"The epicenter of the hit was on the second floor," a police officer said. "She lived precisely in that apartment."

The explosion came at dinner time and could be heard all around central Kyiv. President Volodmyr Zelenskyy said Russia launched a total of five missiles toward the capital Thursday evening. One of them hit a factory across the street that Russia claims was a rocket manufacturing facility. Ukrainian officials have not confirmed this.

The morning after the cruise missile attack that hit the apartment building, you can see just how powerful the explosion was that ripped the guts out of the building — the first three floors of it.

NEWSY'S JASON BELLINI: Did you hear air raid sirens before?

OVCHYNSKY MYKHAILO: We didn't hear any sirens. I heard the Russians say they precisely hit two targets here. But if the target was a residential building, that is genocide.

The strike, as with so many here, was random. Their apartment on the 14th floor had very little damage, but on the first floor, in a dental clinic about to open, every pane of glass was shattered.

Ihor Honcharuk, a dentist, says he and his family put their life savings into this office.

He says he won't know until after they test the equipment whether it was destroyed or not.

Though he and his wife, who's also a dentist, weren't at the office when the missile struck, he finds it difficult to see this as anything but horrible luck.

IHOR HONCHARUK: This is the project of our life.

BELLINI: The project of your life. The dream?

HONCHARUK: Yeah, the dream. It's a dream. But not now.