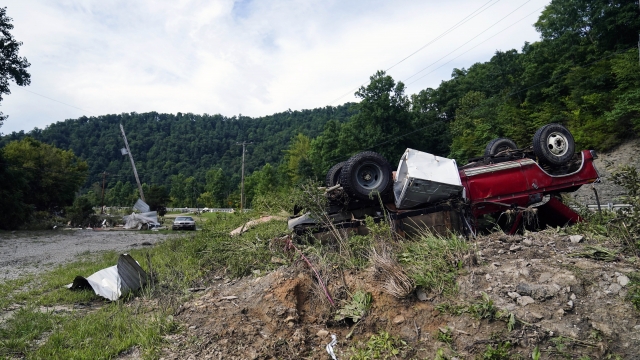 Piles of debris litter a town in Kentucky. No, it wasn't from the recent floods. The damage comes from eight months ago when a rare, powerful EF-4 tornado ripped through several states and destroyed the small town of Mayfield in Western Kentucky.

Every building downtown is damaged, destroyed, and collapsed.

The tornado leveled the town with 190-mile per hour winds. It was the deadliest in state history. Eighty people died, 24 just in Graves County alone.

Most inside a flattened Mayfield candle factory.

At the time, temperatures in the area were above normal for mid-December — in the 70s in nearby Memphis, Tennessee.

"This type of event — and the fact that it happened here and not, say, farther south — that's not something that we typically expect," Western Kentucky University Meteorologist Joshua Durkee said.

Fast forward to last week across the state in Eastern Kentucky...

The historic floods devastated towns, washing away entire neighborhoods and people. At least three dozen are dead and hundreds more are still missing.

In 2016, the Environmental Protection Agency warned annual precipitation in Kentucky would keep increasing and floods would become more frequent.

According to the EPA, the last time the Blue Grass State produced a climate change adaptation plan was in 2010, and it focused on the danger to the state's wildlife.

Both Eastern and Western Kentucky are strewn with debris from climate change events.

"It's gonna take years to rebuild," Gov. Beshear said — as the climate continues to change and disasters become more frequent.