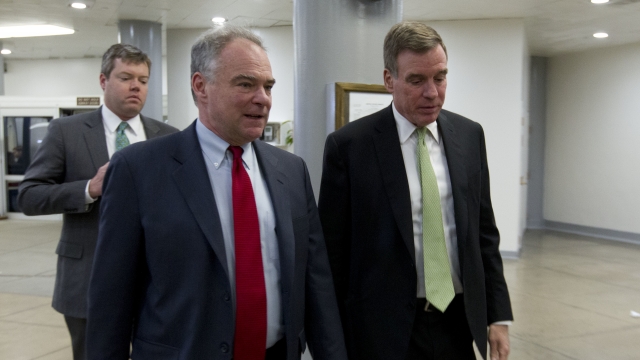 Democratic Sens. Tim Kaine and Mark Warner say their home state of Virginia is a good example of balancing Second Amendment rights with common sense gun laws. And the pair reintroduced a bill that would take a half dozen laws from their home state and apply them nationwide.

"Let's take those laws that passed the Virginia General Assembly, and six of those laws and things like one gun a month, universal background checks, to make sure there's a red flag law, trying to make sure that if you've lost a gun, you get it reported, and say, maybe this would be a good compromise vehicle," said Warner.

Their "Virginia Plan" also includes a provision requiring safe storage of firearms if a minor is around and closes the so-called "boyfriend loophole" by expanding the type of stalking and domestic violence misdemeanors that would prohibit someone from buying a gun.

But Democrats have tried, unsuccessfully, to pass gun reform bills for years. The Senate came close to approving a new background check law in 2013 following the Sandy Hook shooting, but the amendment fell six votes short of overcoming the filibuster.

"You see victims and their family say, 'You know, keep your thoughts and prayers, pass a law that might prevent this from happening to some other family.' You know, that's a hard argument to rebut," said Warner.

Republicans and gun rights advocates often push back against new gun control measures, citing their Second Amendment rights and a distrust between gun owners and policymakers.

"It is a critical barrier to talking about things like red flag laws that can be very effective, to talking about things like, you know, better funding of the FBI or the ATF to crack down on on illegal gun sales, because there's this fear of, you know, well, if we do this, it's going to be used unfairly and arbitrarily against us as a means of, you know, just just taking away our guns," said Amy Swearer, a legal fellow at the Meese Center for Legal and Judicial Studies at the Heritage Foundation.

Both Sens. Kaine and Warner admit that if a comprehensive gun reform bill like theirs has any hope of passing, Congress first needs to pass something more narrowly focused.

"If you can start with background checks, and show that the world doesn't end, that people aren't getting, you know, voted out of office ... I think that might then lead to further reasonable legislation being passed," said Warner.

"In my history in legislative bodies success tends to beget success, and when you can get your first success that then becomes the building block for the next one," said Kaine.