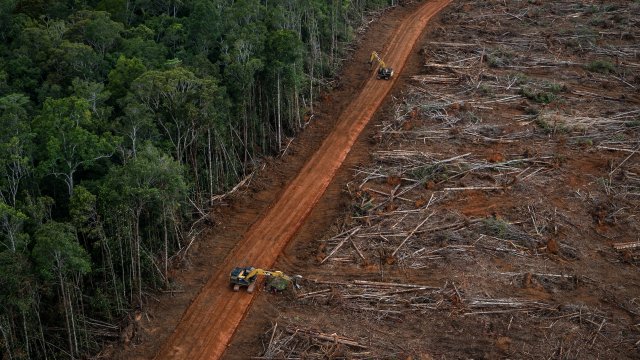 Trees are disappearing on a massive scale all over the world, linked to human activities like logging, mining, growing crops and raising livestock. This is cause for worry not just in terms of the implications for carbon emissions or species extinction but also the rise of emerging and reemerging infectious diseases.

As humans radically reshape landscapes across the world, viruses previously confined to wildlife have more opportunity to spill over into humans. In disrupting intact ecosystems, human activities reduce the natural barriers between virus host animals and humans.

The increase of malaria in Brazil, the first known outbreak of Nipah virus in Malaysia, the reemergence of Ebola in West Africa -- all these outbreaks have occurred in areas where humans had cut down forests.

About 30 percent of all disease outbreaks have been tied to land use change and it’s likely to be a significant driver in future outbreaks as well.

Researchers at EcoHealth Alliance In analyzed data on emerging disease events over the course 80 years to identify global hot spots for emerging diseases. They found that the areas most at risk for future events were forested tropical regions experiencing land use changes.

“When we look at the areas on the planet that tend to be the most vulnerable to emerging viruses and specifically zoonotic viruses, it does have a lot to do with biodiversity,” said Jon Epstein, EcoHealth Alliance’s vice president of science and outreach.

“But it's not the presence of biodiversity, that's the risk. It's the change to that environment, the incursion of people and domestic animals that really creates the risk of these viruses getting out of their native hosts and into people.”

While disease spillover is rare, a growing population combined with global travel and trade means that when an outbreak occurs, it is difficult to contain the spread of the disease.

While no one can predict exactly when and where the next outbreak will occur or what virus will be responsible, scientists hope that focusing efforts to earlier detect zoonotic diseases in wildlife and livestock can be an important action to lower the risk of human infection and stop future epidemics and pandemics before they start.