Family Remembers Their Daughter 4 Weeks After Shooting In Uvalde 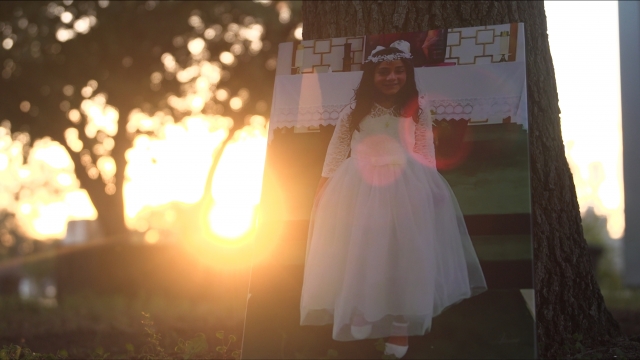 SMS
Family Remembers Their Daughter 4 Weeks After Shooting In Uvalde
By Adi Guajardo
By Adi Guajardo
June 23, 2022
It’s been nearly a month since the Cazares family lost Jackie in the Robb Elementary mass shooting. Jackie would have turned 10.

As the sun sets, and the wind whispers — families pray for peace.

Jazmin Cazares is the sister of one of the victims, Jackie Cazares.

“She was a light, I don’t know how else to explain it," she said.

9-year-old Jackie Cazares had a nickname that matched her spark.

"She went with me to take pictures and she was crying," Jazmin said. "I remember her telling me that it's prom. Once you go to prom, it means you're leaving me soon. I think that hits me every day. Her telling me that I was going to leave her, but someone took her from me," she said.

"She wanted to be a veterinarian," Jazmin said.

An ambition cut short by a gunman who Jazmin went to Uvalde High School with.

"It makes it ten times harder knowing that I probably crossed his path before," she said.

It’s been nearly a month since the Cazares lost Jackie in the Robb Elementary mass shooting.

In that month – Jackie would have turned 10, and celebrated Father’s day with her dad.

Stolen memories are weighing heavy on her father’s heart.

He’s vowed to fight for change in Jackie’s name, and his family will continue to demand accountability.

“Someone needs to be held accountable," Jazmin said.

They're still waiting for that accountability in Uvalde, Texas, but there's something that will eventually help bring the family closure, as they hang on to the special moments to get them through their darkest days.

JAZMIN: Knew she loved me. I know she was my sister. But seeing that, like seeing that she made a video about me. It's like.

NEWSY'S ADI GUAJARDO:  Shows how much she loved you.

A love on display down to her last day on earth.