How Drones Are Changing The Landscape In Agriculture 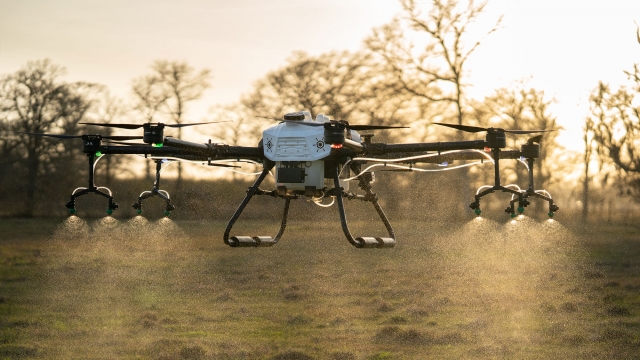 Taylor Moreland sells drones, but not just any drones. He sells drones that keep farmers in mind.

"Our goal really is to provide tools to farmers — provide a brand new tool to farmers where they can aerial apply granular liquid products by themselves on their own, on their own farm," Moreland said.

It was something he started testing at the beginning of the pandemic in rural Missouri.

"I used the first year, 2020, as kind of proving grounds testing," he said. "This is brand new technology, brand new equipment to us."

They're called agricultural spray drones, and they need very little human intervention to work. All you have to do is map out your field and select which spots you want to spray.

"90% of the time, you don't even have to touch the remote," Moreland said. "The drone's just flying."

They can be used to spray chemicals like pesticides on crops and even seeds, coming in handy in areas that are tough to reach.

"When a farmer needs something applied on his crop from the air, right now his only option is to call the helicopter, airplane company and they just broadcast the whole field," he said. "Instead, if a farmer has a drone, that can just hit only the spots that need it. So they're saving chemical, which is better for the environment and better for their costs."

He also pointed out the drones can be used to plant cover crops, which can slow erosion and improve soil health, before harvesting crops.

The technology is fairly new to the U.S., but drones like this have been used overseas for decades now — primarily in Asia.

Arthur Erickson, the co-founder and CEO of agricultural drone maker Hylio, believes this technology is a game-changer for the agriculture industry.

"Due to the abundance of rice paddies over there in Asia, it actually makes a lot of sense because that's wet terrain and it's much better serviced by flying drone vehicles versus terrestrial tractor vehicles," he said. "The drones are interesting because not only can they do what's traditionally done better, cheaper, faster, you know, less labor, more automated, but they're unlocking kind of a whole new way to approach farming that previously wasn't available."

As for the future of these devices, Erickson is hopeful the technology will take off.

"The idea is that you're going to start having these drones going out on their own, so they're charging themselves, they're refilling themselves and they're just kind of scanning these fields and making decisions in real time and solving them before even you have to get involved," he said. "That's going to be the future of this technology, I think, in the next two to three years."

A recently released analysis by the market research firm Sheer Analytics and Insights estimates agricultural drones will be a $6.5 billion industry within 10 years as farmers look to deal with labor shortages and shifting trends toward vegetarianism.