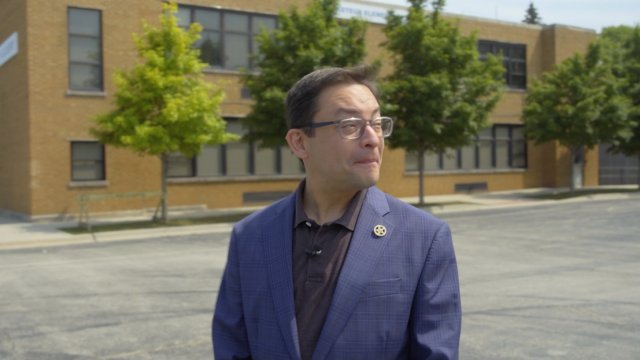 Many say that coming out as gay shouldn’t be that big of a deal. But for people like Chicago’s 15th ward alderman Raymond Lopez, it was.

"I remember being in high school and being in the closet," Lopez said.

Lopez came out more than 20 years ago to his Latino family and friends. Now he’s one of two openly gay candidates running for mayor of Chicago. If elected, Lopez would be the first openly gay man and Latino mayor for the windy city.

"I think is an extraordinary testament to how far we've come in this city and in this country," Lopez said.

But growing up gay was more like living a secret life. He went to an all-boys catholic school, which he says made it not so easy for boys who were hiding their true identity.

"Thinking back, you know, to see classmates of mine who eventually came out and just reliving what it was like with them," Lopez said ."It was a more difficult world to navigate for young people."

Shamed by the stigma in his community and fear for what his loved ones would think of him, he kept his secret to himself. Now he reminisces about the first time he ever told someone.

"A former high school friend of mine who was in college, and I actually ran into him in one of the these meetings," Lopez said. "And, you know, he told me he was bisexual, and I think that was the first time that I actually said that I was gay, like out loud."

Recent data from the Center for American Progress shows that Hispanic LGBTQ+ individuals have experienced discrimination 15% higher than white LGBTQ+ members. The disparities are more evident in access to critical services such as mental health and educational settings.

NEWSY'S AXEL TURCIOS: Why do you think it's still a taboo to talk about your sexuality, especially when you come from a Hispanic background?

RAYMOND LOPEZ: The strong sense of Christian faith within the Latino community. I think that makes people uncomfortable, and it's not something that they've ever heard of in church, to be accepting and welcoming people who are different.

Lopez says it hasn't been an easy road, but he says he wants his story to inspire not only Hispanic teenagers, but everyone who's struggling to come out to feel proud of who they are.

Lopez says many in the Latinx community don't have a lot of role models to look up to.

It’s a thought shared by Mexican-American David Gauna, a board member of the LGBTQ+ non-profit Alma.

"I didn't feel safe because i wasn't sure how others were going to perceive me," Gauna said. "Being gay wasn't something that was communicated to me at all or spoken about in my home, and therefore it felt very foreign and unfamiliar and scary."

Gauna says more spaces for LGBTQ youth need to be created to make them feel more comfortable in their communities and possibly in coming out.

"To this day here in Chicago, for example, there are no spaces that are designed to explore and build and create a safe space that explores the intersectionality of young queer youth who are both queer and Latino," Gauna said.

"You don't have to just be defined by your sexuality, and you're not, and you don't have to be put in a box simply to make other people feel good about themselves," Lopez said.

Lopez is now married and has seven dogs. He and Gauna have different lives, but share the same story: their struggle to come out as gay.

They say their fight for equal rights continues so new generations of LGBTQ+ members can feel safe to be themselves.