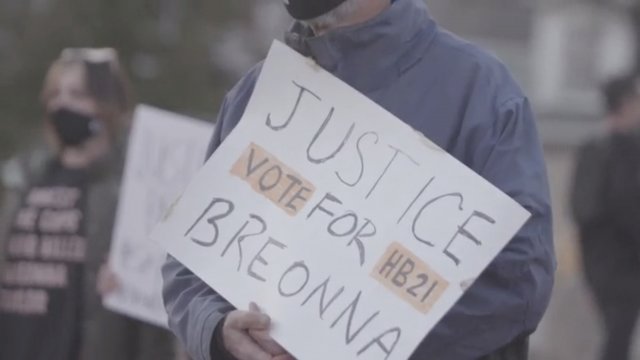 On March 13, 2020, Louisville Metro Police officers shot and killed Breonna Taylor in her home while executing a no-knock warrant.

That night, Kenneth Walker, Breonna Taylor's boyfriend, was arrested on the scene for shooting one of the officers in the leg after they broke down her door. In body camera footage released by the department, Walker tells officers: “We was in the bed. We didn’t know who it was. The gun is legal. ... We don’t even know who it was. She asked 10 times who was at the door.”

So activists are pushing for “Breonna’s Law," a bill that bans the use of no-knock warrants, which allow officers to enter a home unannounced.

"When we know that the subject of a search warrant has the propensity to be violent against others or especially against the police, you know, any tactic that we can use that would mitigate the chance for that to happen is important," said David Mutchler, president of the River City Fraternal Order of Police.  "And that's one of the reasons that no-knock warrants are important."

But the surprise element of no-knock warrants can also be deadly, and Breonna Taylor’s case has launched a national movement to ban them.

While major police departments and cities across the country, including Louisville, have banned no-knock warrants and some states have passed their own version of “Breonna’s Law,” In Kentucky, the law doesn’t have a chance to pass.

"It's been seven months since we filed the bill and we're just getting a hearing," said Democratic State Rep. Attica Scott. "It never stood a chance at this point of passing the House, and then into the same process in the Senate, and eventually becoming law. And so we were left with really no choice but to support Senate Bill 4."

In February, the state Senate passed a bill to restrict, but not ban, the use of no-knock warrants.

"Search warrants are necessary. They're a necessary tool. But that can be done sloppily. I've seen them done sloppily, and when they're done sloppily, that's unacceptable because you're dealing with someone's constitutional rights. And this bill tries to to address that," said Republican State Sen. John Schickel.

The Senate bill limits the hours of the day a no-knock warrant can be served and requires officers to wear body cameras and to seek higher levels of approval.

"I think it's a good first step," said Democratic State Sen. Reggie Thomas. "It will prevent tragic deaths like Breonna Taylor's from occurring in the future."

The Senate bill is now heading to the House for a vote. And supporters of Breonna’s Law hope to add other police reform measures, like mandatory drug and alcohol testing for officers who fired their gun or killed someone.

"Kentucky as a commonwealth has yet to fully honor Breonna Taylor and her memory and to make sure that no other family has to mourn the death of their loved one at the hands of police. There's still work to do," said Rep. Scott.

"It's not enough just to think we can get rid of no-knock warrants or make it more difficult for law enforcement agencies to get courts to approve them," said Phil Stinson, a professor at the Bowling Green State University Criminal Justice Program. "We need to go a few steps farther and look at some of the core components of the police subculture in many places across the country that tolerates lying and falsifications by officers."