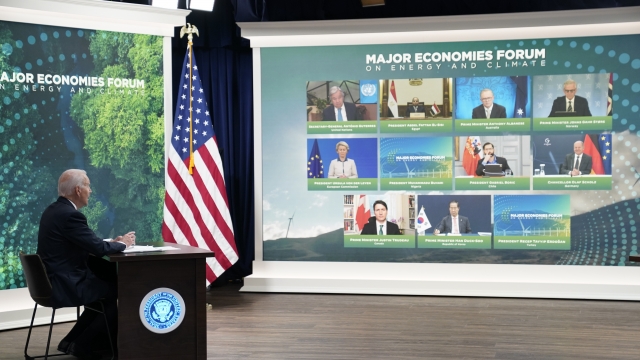 Equating the oil and gas industry to Big Tobacco, United Nations Secretary-General Antonio Guterres said Friday that "fossil fuel producers and financiers have humanity by the throat." But President Joe Biden wasn't quite itching for a fight.

With both soaring energy prices and a warming planet weighing on the world at the Major Economies Forum on Energy and Climate, President Biden talked about trying to ease the pain of high gas prices while pushing more long-term green policies.

Dismissing the idea of boosting gasoline production, the United Nations' top diplomat threw out traditional diplomatic niceties and bluntly vilified the fossil fuel industry at a virtual session that included oil rich Saudi Arabia, China, Europe and Egypt, which is hosting the next United Nations summit on climate change. It was the first time Guterres compared the energy industry to tobacco interests, saying they use "the same scandalous tactics" to delay action that is good for people and the planet.

President Biden reiterated his goal to lower gasoline prices that are averaging a record $5 a gallon in the U.S. while also shifting away from fossil fuels in order to limit climate change and the risks it presents.

"I'm using every lever available to me to bring down prices for the American people," President Biden said. "But the critical point is that these actions are part of our transition to a clean and secure and long-term energy future."

President Biden is also expected to visit Saudi Arabia next month. The White House recently praised the kingdom after OPEC+ announced that it would pump more oil to boost the global supply.

Guterres dismissed more drilling, saying "nothing could be more clear or present than the danger of fossil fuel expansion."

"Had we invested earlier and massively in renewable energy, we would not find ourselves once again at the mercy of unstable fossil fuel markets," Guterres said. "Let's make sure the war in Ukraine is not used to increase that dependency."

The secretary-general decided to amp up the rhetoric because of successful efforts by the industry to use the war in Ukraine as an excuse to start drilling projects, said a senior U.N. official who spoke on the condition of anonymity due to lack of authority to speak for the agency.

"It is very interesting to see the change in tone from the secretary-general. His language is blunter than any secretary general before him," said Niklas Hohne of the New Climate Institute in Germany. "This comes at a time when we indeed observe a goldrush to new fossil fuel infrastructure… Such expansion is counterproductive to climate policy as it would lock the world into a high greenhouse gas future."

In a statement, the American Petroleum Institute said governments and the industry need to work together: "Rising energy costs worldwide and current geopolitical tensions prove it is more important than ever to ensure continued access to affordable, reliable energy while reducing emissions. As populations grow and economies expand, the world will demand more energy, not less."

President Biden's priorities are slashing methane leaks and getting more zero-emission vehicles on the roads.

President Biden administration officials, insisting on anonymity to discuss the event, said they expect some of the countries to announce more ambitious climate targets as part of the landmark agreement reached in Paris in 2015.

President Biden sounded the alarm on extreme weather events in an Oval Office interview on Thursday with The Associated Press.

"We have more hurricanes and tornadoes and flooding," he said. "People saw what — I took my kids years ago to Yellowstone Park. They call me, 'Daddy did you see what happened at Yellowstone, right?' Well, it's unthinkable. These are 1,000-year kinds of events."

But the Russian invasion of Ukraine has scrambled President Biden's climate goals by driving up the cost of gas. Facing political pressure to get prices under control in a midterm election year, the Democratic president has urged U.S. oil refiners to produce more fuel even as companies say they lack the long-term incentives to do so because the administration is accelerating the move to clean energy.

"Well, I say in the short term, do the right thing," President Biden said Thursday, stressing his view that energy companies should increase production instead of trying to maximize their profits.

President Biden comes to the summit with foreign leaders with far less of the climate ambition and hope he declared at the outset of his presidency, when he vowed to make the United States a leader again on slashing fossil fuel emissions to stave off the worst scenarios of global warming. Republicans and some Democrats since then have stalled and all but killed President Biden's most ambitious climate legislation.

While President Biden has succeeded in securing funding to boost electric vehicles and some other climate measures, the setbacks have left President Biden focused on voluntary pledges and initiatives like those Friday, which can easily be abandoned or reversed by future leaders.

That leaves Guterres, who doesn't have the power or political limitations of President Biden, to aim directly at the fossil fuel industry, saying they've "invested heavily in pseudo-science and public relations – with a false narrative to minimize their responsibility for climate change and undermine ambitious climate policies."

Andrew Weaver, a University of Victoria climate scientist and former Canadian legislator, said Guterres' equating the fossil fuel and tobacco industry "is a straight out comparison... "People haven't been accountable for what I would are in some sense some very serious crimes against society."

But Stanford University climate scientist and environment program director Chris Field said Guterres' call to action "as exactly right" but said "we need to make sure that we don't let the focus on fossil fuel companies as bad guys slow progress on solutions."