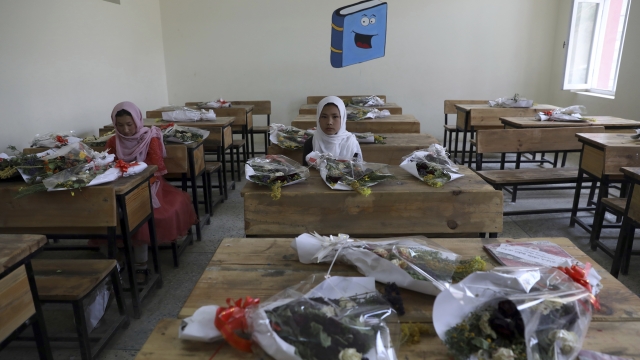 By Meg Hilling
May 26, 2021
Students, educators and activists warn a return to power for the Taliban could result in serious setbacks for the education of girls
SHOW TRANSCRIPT

Less than a month ago, a series of bombs appeared to deliberately target girls at a high school in Kabul, Afghanistan's capital city. This attack has prompted serious concerns about the future of education among women in the country as U.S. troops withdraw and peace talks falter between the country’s government and the Taliban.

"Our students are apprehensive. The government should not ignore women's rights when negotiating with the Taliban," said Shmaila Sowaida, director of the Fatima Balkhi High School.

Prior to its removal from power by U.S. troops in 2001, the Taliban banned girls from receiving a formal education in the country. Speaking with Newsy, students, educators and activists say they are concerned that a return to power for the Taliban will result in those bans being renewed.

"My concern is that people say the Taliban are coming back, and we will not continue our education," Arezo, a high school student, said.

According to a recent New York Times report, the Taliban has already begun imposing education limits for girls in parts of the country under its control. This has reportedly come in the form of school closures, firing of teachers and orders for older girls to remain at home.

"When the Taliban are against small girls going to school, how would they let women go to university and work," Mubariz said.

The Taliban has denied responsibility and condemned the recent bombings outside the high school that left roughly 90 people dead, many of them female students.

"We lost our classmates and friends. We call upon our government to hear our voice and help us. We are tired of this situation," Zahra, a high school student, said.

But not everyone believes a return to power for the Taliban means girls will be barred from receiving an education.

"In my opinion, people say that the Taliban are against women's education is not correct. They want to bring some reforms and regulations according to Sharia law," said Khodadad Sharifi, a religious scholar and member of the Ministry of Hajj and Religious Affairs of Afghanistan.

As the country awaits talks between the Taliban and Afghan government, many say they are not prepared to give up any of the progress the country has made inside the classroom, regardless of what changes the Taliban may have in mind

High schooler Zahra says..."We will never give up going to school!"